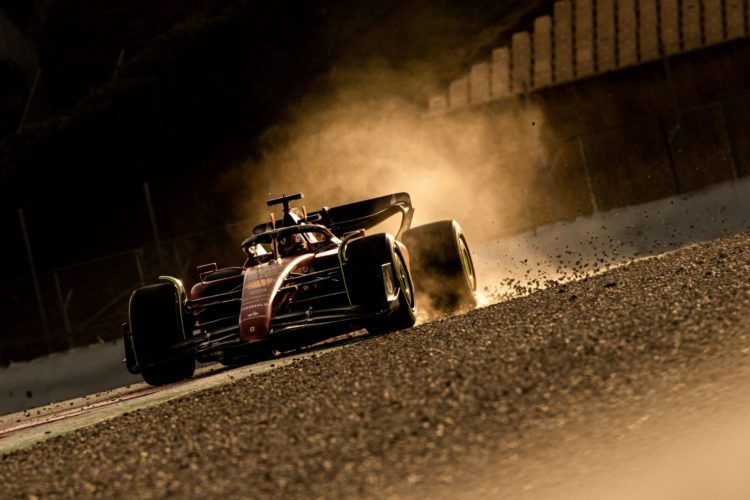 Ferrari’s Charles Leclerc led the way during the second day of Formula 1 pre-season testing at the Circuit de Barcelona-Catalunya.

Off-track talk surrounded the developing crisis in the wake of Russia’s invasion of Ukraine.

Formula 1 teams are due to convene with CEO Stefano Domenicali this evening to discuss the situation.

Formula 1 holds its Russian Grand Prix at Sochi, with the 2022 edition scheduled for September 25, and leading drivers have already called for its cancellation.

The situation is also likely to impact Haas, which has Russian firm Uralkali as its title sponsor, and Nikita Mazepin as a driver.

Mazepin’s father, Dmitry, owns Uralkali, and has previously been aligned with Russian President Vladimir Putin, with the pair meeting as recently as mid-January.

The US-registered team has not yet issued a public comment on the situation and withdrew team boss Guenther Steiner from his scheduled appearance at the lunchtime press conference.

Haas owner Gene Haas has been present at testing today.

Mazepin was in action for Haas on Thursday afternoon, taking over from Mick Schumacher, as the squad accrued valuable mileage, despite the Russian being delayed by a fuel pump issue.

That accounted for one red flag of the day, with the other caused by Red Bull’s Sergio Perez shortly before lunch, due to a gearbox problem.

Perez was absent from the circuit for much of the early afternoon before eventually resuming his programme.

Alfa Romeo finally had a productive session as Guanyu Zhou made his debut behind the wheel of the C42.

Elsewhere the phrase ‘porpoising’ has become commonplace owing to the way the new cars are effectively bouncing along the straights approaching maximum speed.

This is due to the manner in which ground effect operates; the amount of downforce means the floor gets so close to the ground that it stops operating effectively, leading the car to rise, before regaining downforce – creating a repeat until the braking zone.

Testing is due to resume at 09:00 local time on Friday.