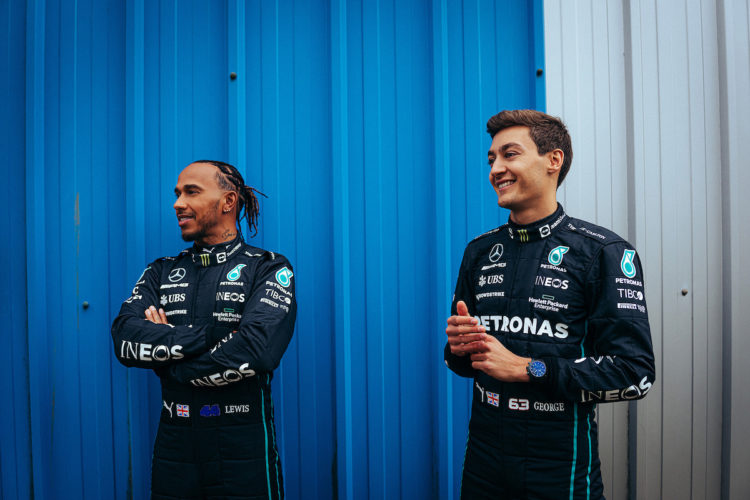 George Russell says Mercedes can’t afford to have a heated rivalry between himself and team-mate Lewis Hamilton in 2022.

Russell has joined Mercedes for his first full Formula 1 season with the Brackley-based squad this year, having spent several seasons associated with the outfit as a junior.

The Briton’s first season as a works Mercedes driver comes as the sport enters a new era, operating under fresh technical regulations.

With development throughout the 2022 season set to be a key factor in F1’s pecking order, Russell states that a rivalry within the team could distract its progress.

However, the 24-year-old is confident that he will be able to avoid conflict with his seven-time World Champion team-mate.

“We hear rumours from all of the other teams of how much they’re developing,” Russell said.

“You’ve got to remember that F1 developed this rule-set with the idea that they were going to be around four seconds slower but we’re already hearing from every single team they’re far, far faster than that.

“Lewis and I need to work together, we can’t focus too much on each other because things are constantly changing and that’s why we need to take a step back.

“We hope Mercedes will still be the fastest team, the fastest car on the grid but there are no guarantees and we need to not be naive to that and work together to ensure that we are.”

Russell gave Mercedes’ W13 car its on-track debut on Friday during a shakedown at Silverstone, held in high wind conditions.

The former Williams driver says although the environment was difficult, he enjoyed his first taste of the new challenger.

“This morning it gave me goosebumps when the car was fired up for the first time,” Russell said.

“I’ve driven so many laps in the simulator, I’ve had so many drawings of it, had so many meetings about it but there’s nothing like going to a race track.

“It almost brings me back to my roots. A cold, wet, windy day at Silverstone but here with the Mercedes F1 team.

“I think the facts are, if you take the exact same car when there’s no wind and then you put it in 100km/h winds it’s going to feel very difficult to drive. It certainly wasn’t easy out there in the conditions but it was certainly in line with what we saw on the simulator.

“I’ll be going back and correlating this afternoon but it is going to be a constant learning process.

“We’re all going to take today with a pinch of salt, get through the programme, make sure the car runs okay, make sure the drivers are comfortable and make sure we’re in the best spot possible ahead of Barcelona.”