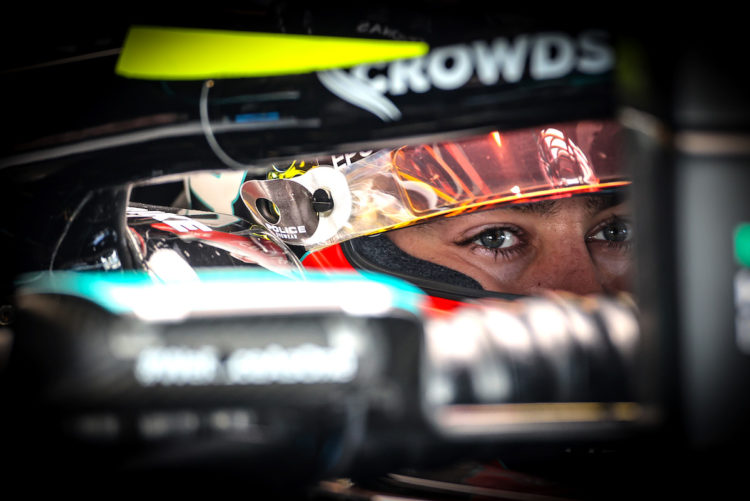 George Russell says joining Mercedes for the 2022 Formula 1 season feels like he is “returning home”.

Russell signed with Mercedes as a junior driver in 2017 and won the GP3 and Formula 2 Championships in successive years, before progressing to F1 with Williams in 2019.

The Briton was chosen to replace Valtteri Bottas at the team this year and partner seven-time World Champion Lewis Hamilton, as Mercedes goes in the hunt of a ninth consecutive Constructors’ title.

The team missed out on its first Drivers’ Championship of the turbo-hybrid era last year, when Red Bull’s Max Verstappen claimed a dramatic victory in Abu Dhabi.

Despite switching outfits for his fourth season in F1, Russell says the vast amount of time he has spent with Mercedes team members prior to moving to Williams has helped him ease back into the environment.

“It’s an incredibly special feeling to be an official Mercedes driver, and a bit of a strange feeling at the same time,” Russell said.

“I spent so much time there in Formula 3 [and] Formula 2 as a junior driver. In a way it feels like I’m returning home to people who I’ve known for such a long time.

“[I’ve been] getting up to speed with how the team operates again, which is something that I’ve really enjoyed.

“Because I spent so much time with the team prior to joining Williams in Formula 1 as a junior driver, I feel like I know everybody so well already.

“We got straight to business on the important bits and bobs to understand the car, understand the challenges and try to prepare as best as possible for the season ahead.

“Following the conclusion of last year, there’s so much motivation and fire from the whole factory to bounce back. That’s been incredible for me to see.”

New technical regulations are being introduced this year, with Mercedes set to unveil its car on Friday, February 18.

Russell says he has already sampled the W13 car in the team’s simulator, and confirmed that it feels different to the sport’s most recent era.

“The first impressions of the W13 have been interesting. It’s a very different car to the previous era,” Russell commented.

“The characteristics of how the downforce is produced is completely different. We’re still learning as we’re going, there’s still a huge amount of improvements to be made to bring everything together, to make it as nice as possible to drive.

“I see a lot of people in the same boat, we’re just learning so much day after day, whether it’s in the wind tunnel or in the simulator. It’s going to be a year of development.

“Everybody wants to go to the first race and have the fastest car possible, but what will be more important is understanding what your limitations are and how are you going to improve from those limitations to build the best foundations possible.”