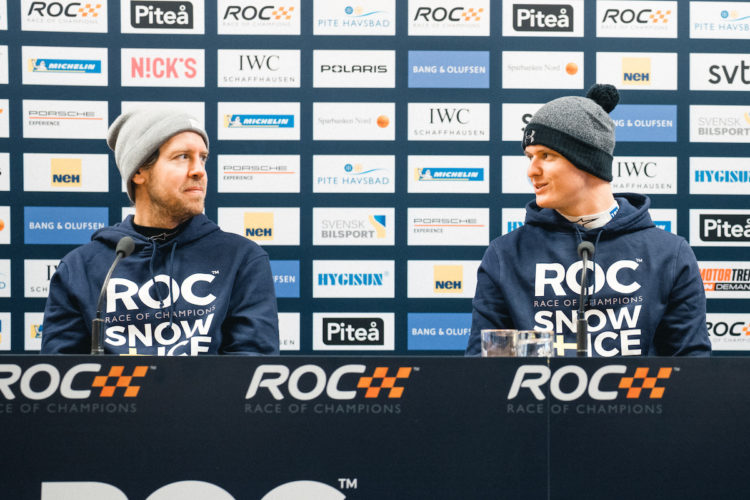 Sebastian Vettel is hopeful that he and team-mate Mick Schumacher can walk away from this weekend’s Race of Champions with the Nations Cup secured for Team Germany.

Vettel and Schumacher are pairing up at the event for the second time, having been team-mates at the 2019 round in Mexico City.

Three years ago, the duo made it to the final of the Nations Cup, but were defeated by the Team Nordic drivers of Johan Kristoffersson and Tom Kristensen.

Previously, Vettel enjoyed a dominant run in the Race of Champions Nations Cup alongside Mick’s father, seven-time Formula 1 Champion Michael Schumacher, as they won the Nations Cup every year from 2007 to 2012.

Speaking ahead of this weekend’s event in Sweden, which will be held for the first time in snow and ice conditions, Vettel says he is hoping to enjoy a similar stretch alongside Mick.

“I think it’s very exciting, I’m a big fan of this part of the world, of the north and its conditions in the winter,” Vettel said.

“[I’m] not yet completely convinced of driving on ice, because I still struggle to judge exactly what I need to do. But it’s a lot of fun, I think it will be a fun competition.

“In particular it’s fun this time to be out on ice, it’s a different driving [style] required. As usual, [there’s] very limited time to swap between the cars and get used to everything but that’s the challenge.

“We’ll see how we get on, we’ll try to do well together as Team Germany to fight off all the Scandinavian teams.

“Last time we were out we finished second, we were in the final and were quite close. Generally, the Nations Cup has been quite good to Team Germany.

“With Michael, we won a couple of times. With Mick I need to stretch and we’ll try to keep that rhythm. Progressing as much as you can is always fun, because you get more driving. That’s the target.”

The Nations Cup will get underway on Saturday at 12:00 CET. Team Germany’s first outing sees it pitched against the eRoc All Stars of Jarno Opmeer and Lucas Blakeley.