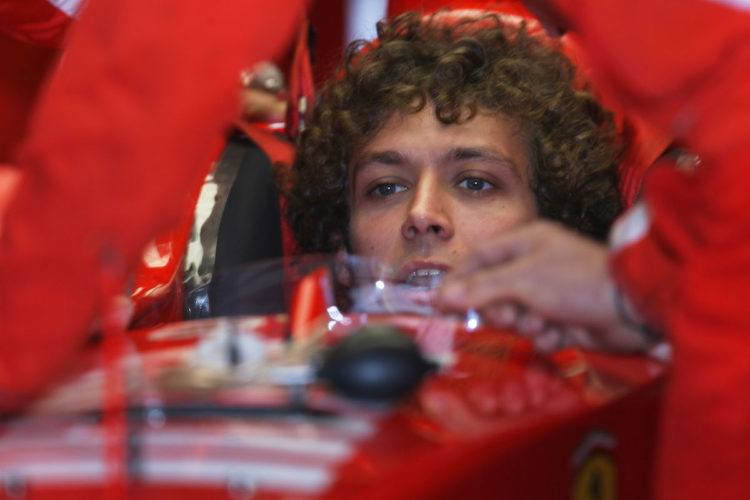 MotoGP legend Valentino Rossi has opened up on his near-switch to Formula 1 15 years ago.

Rossi had a series of test outings with Ferrari and held discussions with the Italian outfit over a potential transfer from two wheels to four.

The seven-time champion tested Ferrari’s F1 car for the first time in 2004 at its Fiorano track, which Rossi describes as one of the highlights of his career.

“It was a very good moment in my life,” Rossi said in an interview with Graham Bensinger. “Stefano Domenicali from Ferrari called me and said ‘Why [do] we not try the car?’

“They have a track in Fiorano, where they try the Formula 1 [cars], it’s a one-minute track but it’s fast, it has a hairpin, everything. I said ‘OK’.

“We organised this, I arrived in secret the day before. We had to try to keep [it] a secret. But it was not secret in the end.

“We stayed in Enzo Ferrari’s office, alone, me and Uccio [Salucci]. It was an unforgettable moment.”

A couple of years later, a plan was formed that would potentially see Rossi switch from MotoGP to F1.

However, Rossi says that on the plane journey home following a 2006 Valencia test with several other F1 drivers, he opted to remain in MotoGP.

“But I remember that was the time when I came back home on the plane, when I decided to stay in MotoGP.

“For Formula 1, I had a plan, but it was not straight with Ferrari. It was starting with a small team, try to make some experience and then after, if I’m fast enough, arrive at Ferrari.

“There were a lot of question marks. I think with the car, I was not too bad, but I wanted to continue to race in MotoGP. It was not easy.

“I also had a lot of pressure from my side. [People said] ‘Go with the car, go with the Ferrari, it’s something big’.

“Everyone, when I tried to explain, they said to me ‘No, no, you have to go for F1!’ Also my mother, for example. [But] I think I have to decide myself, and in my heart, I think I had to stay with MotoGP.”

At the end of 2021, Rossi retired from racing in MotoGP.