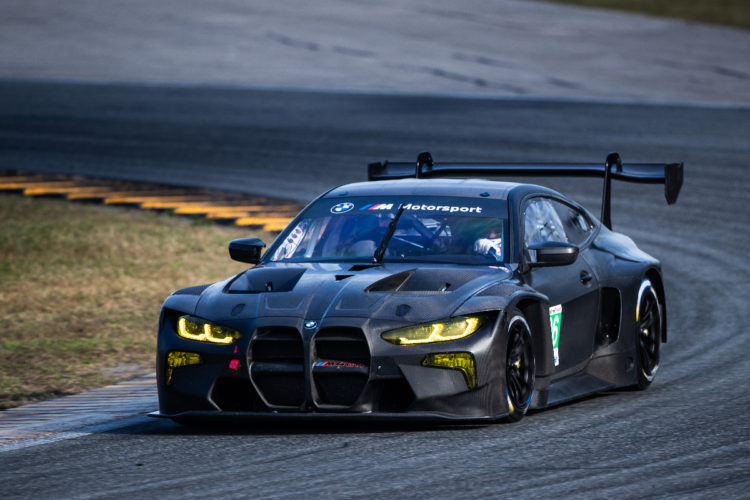 BMW veteran Bill Auberlen is positive about the step forward that BMW has taken with the introduction of its new M4 GT3, stating that the car has cured ‘most of the ailments’ the old M6 GT3 suffered from.

Auberlen will be one of the drivers that will be giving the M4 GT3 its North American race debut at Daytona. He will share the #96 car with Robby Foley, Michael Dinan and Jens Klingmann.

It will mark a new chapter in BMW’s GT3 history, as it previously operated the M6 GT3 for six years before it was retired at the conclusion of the 2021 season. BMW has looked to take a significant step forward with its new GT3 challenger, especially as the M6 had started to become dated against newer, more updated machinery from rival manufacturers.

Towards the end of its lifespan, Turner Motorsports was one of just a few teams that still fatefully stuck by the car, managing to keep it operating as a regular contender for race wins in 2021.

Now, with the new V6-engined car taking over, Auberlen states that he is confident that the M4 GT3 will be the step forward BMW is aiming for.

“When you first drive it, you are almost intimidated by it because you don’t want to be the first person to put a scratch on it,” Auberlen said. “My first impression is it has cured most of the ailments the M6 had: traction and hard on tires.”

“Their objective? Get through a stint and be as fast as you can on the last lap as the first lap. That was the objective. It looks like it will do that.”

Auberlen first drove the new car in a shakedown test at the Daytona International Speedway in early December. According to the 53-year-old driver, that test took place significantly earlier that was first anticipated.

“We were supposed to get our car in early January,” he said. “[Another team] pulled out of getting a car that was going to Dubai, (so) we got ours more than a month in advance.”

“Once that happened, team owner Will Turner told me, ‘I think we can make the Daytona test’ and put us on the roster. It was tight. The car landed in a cargo plane in Orlando on December 5. They trucked it here and everybody on the team is looking at the car like it’s a new Christmas toy – figuring out how to start it.”

“The crew took it all apart, then put it back together and put different gears in it for Daytona. We did a soft, gentle, no-pressure rollout and it ran pretty perfectly. The team is very happy with it.”

Despite the switch to the M4, Auberlen will retain fond memories of the M6 GT3 as the car that made him the winningest driver in the history of IMSA racing.

“We love that car. That car has done us very well,” he concluded. “You are always looking for the new kid on the block and the new awesome technology that comes down the road.”

“Now we are in the M4 GT3. The bodywork looks beautiful. When you pull the bodywork off, it’s like looking at a Picasso. It is all new technology. It is beautiful. This comes out of Formula One, IndyCar, anything these BMW engineers could think of, they stuck it in there. It’s amazing.”