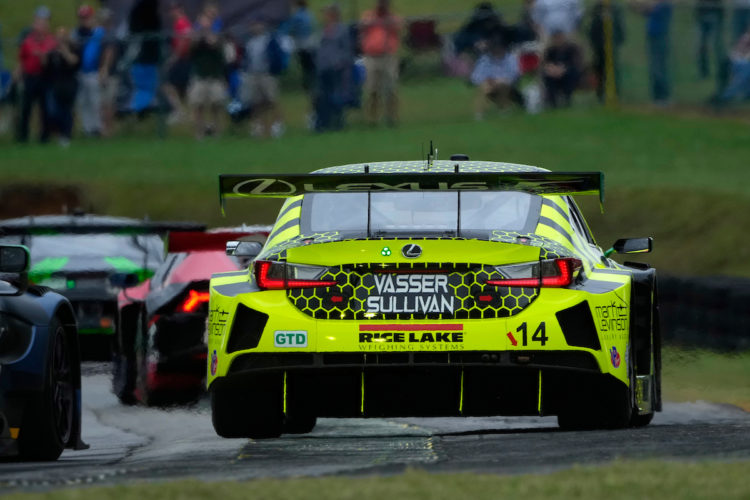 Ben Barnicoat, the new recruit to Vasser Sullivan’s ranks for its GTD Pro effort in the IMSA WeatherTech Sportscar Championship, says the opportunity to join Lexus after his McLaren departure was ‘a surprise’.

Barnicoat will team up with compatriot Jack Hawksworth for a full-season effort aboard the #14 Lexus RC F GT3 in the new category in 2022.

The Briton spent four years as a factory driver with McLaren’s GT squad before leaving at the end of 2021 but not before making his IMSA debut with Inception Racing at Petit Le Mans, driving a McLaren 720S GT3.

When his tenure at McLaren came to an end at the closing of 2021, Barnicoat says he received a call from Lexus, much to his surprise.

“I was coming off a great 2021 season and was lucky enough to get a call from Lexus,” said Barnicoat. “It did come as a surprise, to be honest. I had a very good year and I was hoping people were looking at me.

“For the call to come from America, when I had been racing in Europe, that was a little bit of a surprise. America is the place I’ve always wanted to race and be here fulltime. As soon as that phone call happened, it was an opportunity I didn’t want to let slip.”

Prior to his time with McLaren in GT racing, the 25-year-old competed in junior single seaters, notably winning races with Hitech GP in the European F3 Series in 2016. A year later, he signed on as a McLaren factory driver and began competing with Strakka Racing in the Blancpain GT Series.

He’s also had several outings in ACO-rules racing. He made his Le Mans debut with Inception Racing last year and join Carlin’s short-lived Dallara LMP2 effort in the European and Asian Le Mans Series in 2019.

The relationship with Carlin also led to a brief and unexpected return to Formula 3 in 2020, replacing Enaam Ahmed for four races midway through the season.

“It was an easy transition from Formula to sports car racing,” Barnicoat remarked. “When I drove for McLaren, we had some good results. Saw some highs and lows. I did well enough to earn my place here on the Lexus team.”

“I raced mostly GTs in Europe. I did a brief spell in LMP2 in 2019 when I did the Europe Le Mans and Asian Le Mans series with Carlin Motorsport.”

Barnicoat will team up with one of the most experienced drivers in Lexus’ stable in Jack Hawksworth. The two drivers were born not far from each other. Barnicoat hails from Chesterfield in Derbyshire, while Hawksworth was born in the nearby West Yorkshire county, in the town of Bradford.

“I’m very happy to be here and have a teammate like Jack Hawksworth – another Brit! – and that works well,” Barnicoat concluded. “We call ourselves ‘Team Northern England.’”

“This is an amazing opportunity for me. It’s amazing to see the direction Lexus is going with its motorsport program and to have a teammate like Jack, you can’t ask for more.”