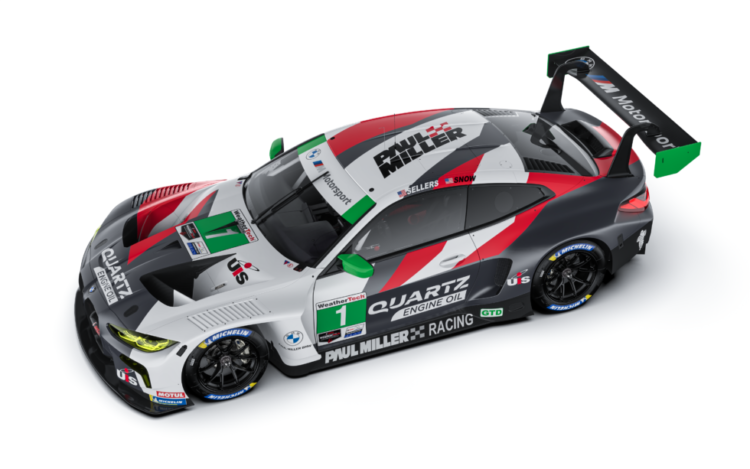 Paul Miller Racing will contest the 2022 IMSA WeatherTech Sportscar Championship with the new BMW M4 GT3, but will be forced to skip the Rolex 24 at Daytona season opener.

The team announced back in November that it would be bringing its multi-year Lamborghini partnership in the GTD category to an end.

Instead, it will be racing BMW’s all-new GT3 offering, which makes its full competitive debut this year. The team’s line-up remains unchanged, with Bryan Sellers and Madison Snow continuing their partnership.

Paul Miller Racing, part of the Paul Miller Auto Group, has extensive history with the Bavarian brand, having opened its latest BMW dealership in New Jersey in 2008.

“We’ve been fortunate enough to win championships and some of the biggest races possible in sports cars over the last six seasons,” team owner Paul Miller, said.

“However, we’re excited to tackle this new challenge with BMW. As someone who has been intimately involved with BMW as a dealer for over 20 years, I’ve seen firsthand the performance of their road cars and watched their success in competition.

“So, we are excited to join them on the motorsports side! The M4 GT3 is a very impressive race car with tremendous originality infused in its design. I’m looking forward to us racing it in IMSA starting in March.”

The switch of machinery does mean that the team will be forced to sitout the upcoming Rolex 24 at Daytona, as the car will not be ready in time.

As Miller explains, the new car originally wasn’t going to be ready until after the Twelve Hours of Sebring, but that has been forward to ensure the team will only have to miss the opening round of the season.

“Originally, we weren’t going to receive the car until April, but the team at BMW M Motorsports have done a great job to ensure we will be able to compete from Sebring onward this season.

“We’re also very glad to have Madison and Bryan back as part of this team again in 2022. This entire team is like a family, and those two are a massive part of that environment. Plus, it doesn’t hurt that they’re quick in a race car!”

“The results from both really speak for themselves and I think with the M4 GT3 on their side, they will continue to be a formidable pairing in 2022.”