Ecclestone: Some at Ferrari were surprised Sainz challenged Leclerc 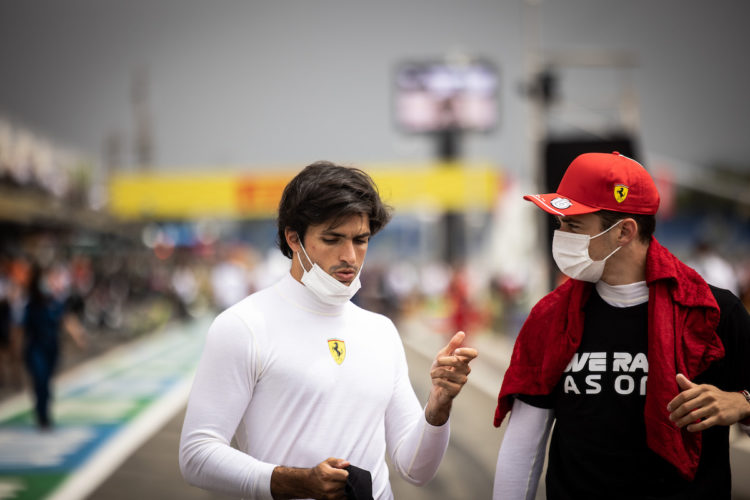 Ex-Formula 1 CEO Bernie Ecclestone says there are some within the Ferrari team who were surprised that Carlos Sainz challenged team-mate Charles Leclerc in 2021.

Sainz joined the Maranello-based squad for the 2021 season after spending two years at McLaren.

Leclerc endured his third year with the Italian outfit, having joined in 2019 following his rookie season at Sauber.

Sainz ended the 2021 campaign fifth in the Drivers’ Championship and ahead of Leclerc, scoring four podiums across the year.

Although Leclerc out-qualified and finished ahead of Sainz in the race more often, Eccelstone says that Sainz’s pace at Ferrari raised a number of eyebrows within the team.

“Carlos Sainz’s father called me and told me about his son’s situation,” Ecclestone told Blick.

“Let’s put it this way – many people in Maranello are surprised that the Spaniard could give team-mate Charles Leclerc such a run for his money in 2021.

“For me, Leclerc was always a very good driver, but not anything more.”

Ferrari ended the season third in the Constructors’ Championship, recovering strongly from a lacklustre campaign in 2020.

The team has signed Leclerc through to the end of the 2024 campaign, while Sainz is contracted to the conclusion of the 2022 season.

Following the season finale in Abu Dhabi earlier this month, Ferrari team principal Mattia Binotto confirmed that it would discuss future options with Sainz over the winter.

Laurent Mekies, the team’s sporting director, recently spoke about the feedback that both Leclerc and Sainz give, believing the duo are currently “as good as it gets” for team-mates in F1.

“We think it’s one of the strong points we do get now, not only because they describe what they feel, but also because they have the will and motivation to go back and work with us on finding solutions,” Mekies said, as quoted by Motorsport.com.

“They do it with different words, so we can click things together. They don’t always agree, which again gives us a chance to look at things in a wider way.

“I think the short answer is yes, we think that part is working well. There is always more to come because of the way it is.

“But the way they complement each other, Carlos and Charles, is at the moment as good as it gets.”