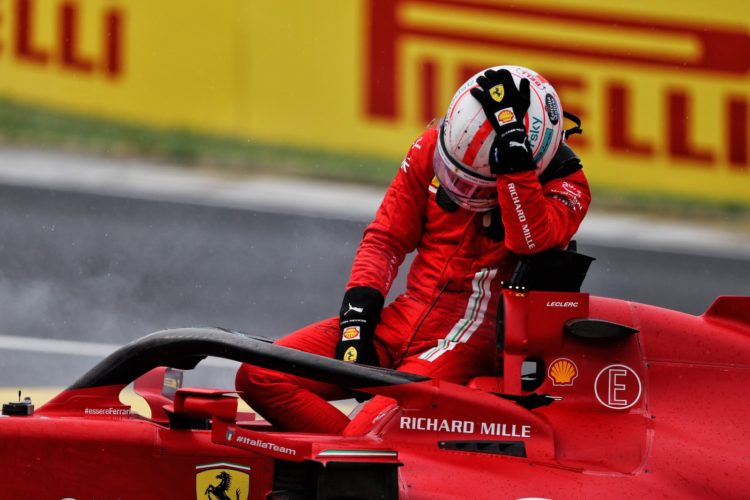 Charles Leclerc had the potential to classify fourth in this year’s Drivers’ Championship, believes Ferrari boss Mattia Binotto, pointing to missed chances in Monaco and Hungary.

Leclerc was beaten in the final standings by a team-mate for the first time in 2021, as he was eclipsed by 5.5 points by Carlos Sainz, who finished fifth to Leclerc’s seventh.

But Leclerc missed out on starting from pole in Monaco following a driveshaft failure on the reconnaissance lap, while he was also wiped out on the opening lap in Hungary.

Binotto lauded Leclerc’s progress through 2021 and felt he was unfortunate not to finish potentially as high as fourth in the overall standings.

“For Charles’ overall performance, I’m very happy with the progress he has made this season,” Binotto said.

“He’s been very fast in the qualifying, even in the last part of the year when maybe Carlos was challenging him a bit more – but he has always been very fast.

“We should not forget this season, at least a couple of examples, like Budapest and Monaco, when he didn’t score – but I think he has been unlucky as a driver in those occasions.

“Without that, it is difficult to say where he would have finished – but there is at least 40 points missing in his classification.

“Without that I think he would have been a lot further ahead in the championship, which is why I can only judge very positively his season.

Binotto was also encouraged by the improvements shown by protégé Mick Schumacher, at Haas.

Schumacher will remain in a race role at Haas for 2022 and will also combine it with a reserve role for Ferrari at 11 grands prix.

“Mick through the season did well, he improved himself not only in terms of consistency, but as well in terms of speed,” Binotto said.

“If you look at the last races, he was a lot closer to the cars ahead, and Haas didn’t develop the car at all. The fact he was closer proved he had a good improvement on the speed itself.”