Bottas impressed at how Hamilton ‘keeps getting better’ 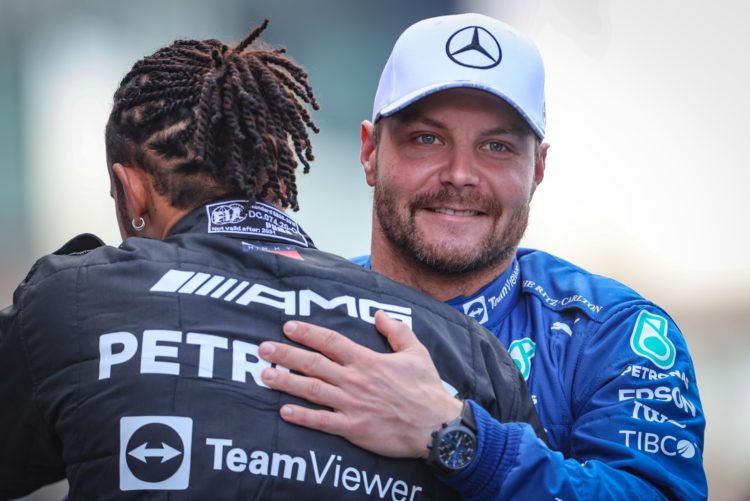 Valtteri Bottas says Lewis Hamilton “keeps getting better” and is impressed by the manner at which the seven-time champion still strives for personal progress.

Alfa Romeo-bound Bottas was paired alongside Hamilton at Mercedes for five seasons from 2017 through 2021.

Hamilton won four titles alongside Bottas, and finished runner-up in 2021, with Bottas believing the Briton never rested on his laurels despite the continued success.

“With Lewis what has been really impressive is that every year he’s still able to develop as a driver,” said Bottas, speaking before Formula 1’s final race in Abu Dhabi.

“He’s got such a big experience of Formula 1 but still he’s been able to learn more and for sure I’ve developed myself as a driver, but so has Lewis.

“It doesn’t come automatically, he works for it because he knows the competition is getting tougher and tougher.

“I’ve definitively learned many things from him during these five years, driving wise, set-up wise, lots of small things here and there.

“It’s been impressive to see him still develop and not get too comfortable. He always wants more out of himself and the team around him. It’s been the same thing every year, he keeps getting better.”

Bottas spent five years with Mercedes, contributing to its ongoing Constructors’ success, and taking 10 victories, while twice finishing runner-up in the standings.

He conceded to leaving with mixed feelings after not achieving his personal ambition.

“Obviously when I joined the team in 2017 the only thing on my mind was to win the championship but that didn’t happen,” he said.

“But I need to look at the positives, I’ve grown so much as a driver and as human being I learned a lot with this team and we actually achieved pretty cool things together, so there are many positives to take.”