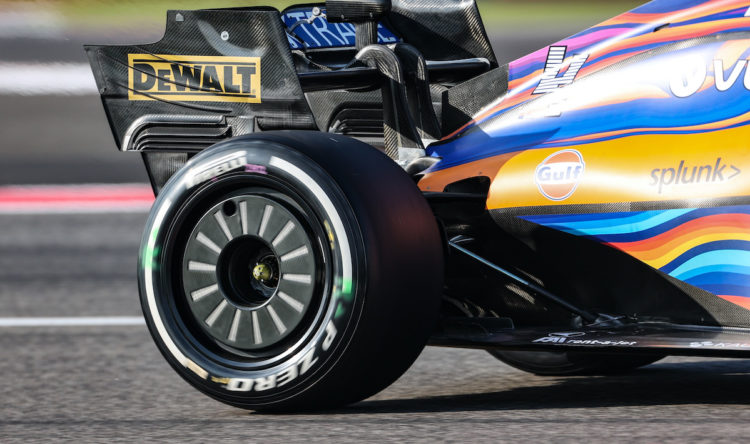 The 2021 Formula 1 season concluded in Abu Dhabi recently in dramatic fashion, but the majority of teams remained behind to participate in a post-season test, which gave us a small glimpse into 2022.

Pirelli and the teams took the opportunity to test next years new 18-inch wheels and tyres, giving us an opportunity to observe the differences between the old and new, which mark an epochal turning point in F1.

The tests allowed both the teams and Pirelli to collect important data on the behaviour of the tyres for next season, which will of course have a major impact on suspension settings.

Compared to the previous tests, carried out in Imola and Paul Ricard, in Abu Dhabi we were able to appreciate the new ergonomic wheel covers which will be run next year. Not all teams ran the covers, but they are permitted under the 2022 rules as we saw on the prototype ’22 car model unveiled at Silverstone this year.

The modifications to the covers compared to the initial design we saw are intended to aid the mechanics’ grip at the pit stop. The new design seen at Yas Marina has a shape that is not as flat, but rounded towards the outside. The curved shape allows you to create two bumps on the outer edge, and on the central edge (near the hub) to allow mechanics to have a firmer grip with their hands.

The change in the shape of the covers is due to an intervention by the FIA, which were met with complaints by several teams who contested the poor ergonomics of the new tyres, which could create dangerous situations at pit stops.

Speaking with Mario Isola, he confirmed that the new tyres will have a total weight (tyre+rim+cover+sensors) equal to 18kg at the front, and 21kg at the rear. A considerable weight for the mechanics to lift and quickly place into position.

The modification to the cover section also meets the needs of Pirelli employees for balancing control, with the insertion of lead counterweights inside the rim.

The FIA, therefore, together with the sole supplier BBS, has authorised a modification of the shape of the wheel trim in such a way as to provide better grip for the mechanics, without affecting the aerodynamics of the single-seaters.

The 2022 wheel covers will be part of the PDC components (prescribed design components), which are standard components for everyone but with the possibility for teams to make small changes. Any research of thermal – aerodynamic advantage by the teams will obviously be there, however it will be very difficult to find “grey areas” in the 2022 regulations.

During the tests, McLaren also carried out a trial which saw them include a series of LED strips along the wheel trim, to test a new technology to display logos/sponsors with a view to a possible introduction in 2023 – which would be particularly visible at night races of which there are now several on the calendar.

PDC components will also include the bells that wrap around the brake discs, with some teams having already tried in Abu Dhabi some solutions ahead of 2022. The FIA ​​with the new regulations has tried to limit as much as possible the aerodynamic influence that the brake ducts and the entire braking system will have.

In addition to changing the tyres, both the front and rear brake discs will also change. The diameter will be increased on both axles, and the way braking is managed could influence the driving style of the drivers compared to this season.

In the drawing there is a comparison with the front discs of 2021 and 2022, where in addition to the diameter, the ventilation micro-holes will also change. The teams will have to cope with a reduction of the vents along the width of the disc which allow for the dissipation of heat given off by the friction between the calliper and the disc – if not managed correctly, this heat is transferred to the tyre and can either aid with tyre warming, or can increase degradation.

Temperature management will also be more critical due to the fact that the 18″ wheels have increased the distance between the rubber and the brake bells, which will result in less heat transfer. However, during the tests at Yas Marina, the graining problems highlighted in past tests seem to have been partially resolved, with the 18″ tyre struggling to heat up in the innermost area of ​​the carcass.

The transition to an 18-inch rim (instead of 13-inch) will change the behaviour of the tyres with regards to the window of use, which Pirelli has aimed to make wider. The reduced shoulder will also have an influence on the drivers’ driving style, since there will be less distance between the rim and the asphalt, and the bumps on the track will be noticeable.

Collecting the comments from the drivers after testing the new tyre in Abu Dhabi, many agreed that the car’s behaviour tends to understeer in slow corners. The cause could also be linked to the lower pressures after Pirelli notified the teams to use pressures which were reduced by 1.5 PSI.