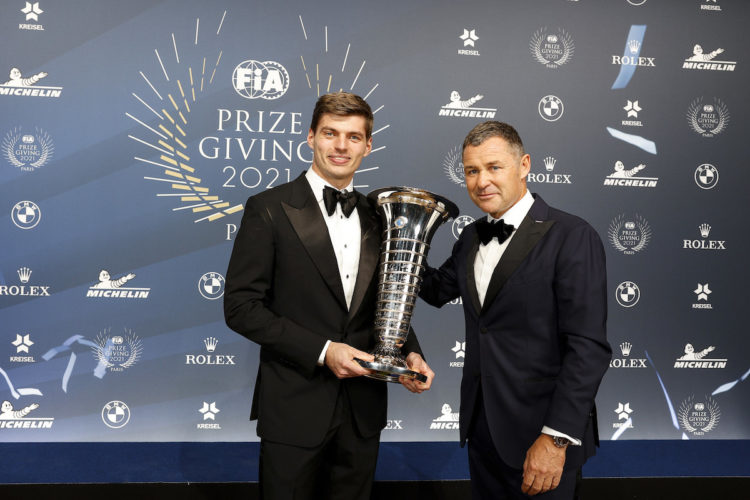 Max Verstappen has hoisted the Formula 1 World Championship trophy for the first time since securing his maiden title.

Verstappen triumphed over Lewis Hamilton last Sunday in Abu Dhabi, overtaking the Mercedes driver on the final lap of the grand prix for the win.

The achievement capped off Verstappen’s most successful F1 season to date, as he bagged 10 wins, 10 pole positions and 18 podium finishes.

On Thursday, he lifted the trophy at the annual FIA prize giving gala in Paris.

“When I was in go-karting I never really thought about it too much,” Verstappen said when asked if he always thought winning the F1 championship was possible.

“I was just enjoying my time, I just wanted to win every single race I was competing. Of course, in the back of your mind your goal is to get to Formula 1 and win there as well.

“But that’s still so far away, you just try to do it one step at a time. I think the steps went quite quick, but for me, the biggest influence in my career, especially the beginning, was my dad.

“With his experience of being an Formula 1 driver, he prepared me very well for everything, so everything that came at me was not a shock or a surprise.

“It felt pretty normal, which of course, it isn’t normal. He helped me a lot, these kind of things you will never forget.”

Although Verstappen took home the Drivers’ Championship, Red Bull missed out on the Constructors’ title to Mercedes.

However Hamilton and team principal Toto Wolff opted not to attend the ceremony after Mercedes was left displeased with the FIA over how it handled the late-race Safety Car restart procedure in Abu Dhabi.

Mercedes protested the result post-race last Sunday, but it was dismissed by the Stewards.

The team has since concluded that it will not go forward with an appeal process.