Sainz pleased with podium ‘no one will probably remember’ 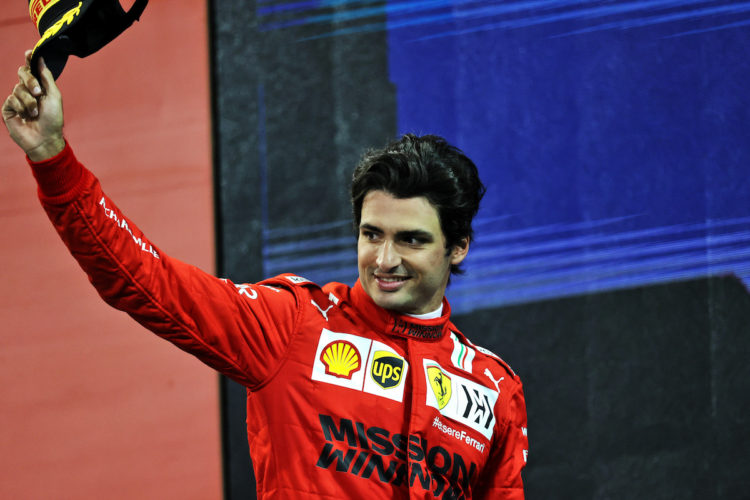 Carlos Sainz expressed delight over ending his maiden campaign at Ferrari with a podium finish at the Abu Dhabi Grand Prix.

However, the Spaniard acknowledged that it will be a third-place result that “no one will probably remember” due to the title drama that unfolded ahead of him.

Sainz was running in fourth place late on in the race behind the Safety Car, but moved up to third when Sergio Perez retired from the grand prix in the pit lane.

He was forced to defend from the AlphaTauri of Yuki Tsunoda on the final lap, but managed to take the chequered flag in third, securing his fourth podium of the year.

“It’s truly a great way to end a very positive first year in Ferrari for me,” Sainz said. “A very challenging year but in the end, it turned out to be a very strong one.

“A year that I’m quite proud of and yeah, to finish it with a podium that probably no-one will remember – I’ll add it to the collection – because of whatever was happening in front.

“I enjoyed it a lot and put together everything that I have learned through this first year to put probably my strongest race in Ferrari together.”

With the result, Sainz jumped to fifth in the Drivers’ standings, finishing the year ahead of team-mate Charles Leclerc.

“It’s not like finishing fifth, sixth or seventh in the Championship today would have changed my mood going into the winter break,” Sainz said.

“Especially the way it finished in this last third, just gives me a lot of confidence going into 2022, for whatever happens and whatever car Ferrari and I have, we will go for it, because my confidence is high.”