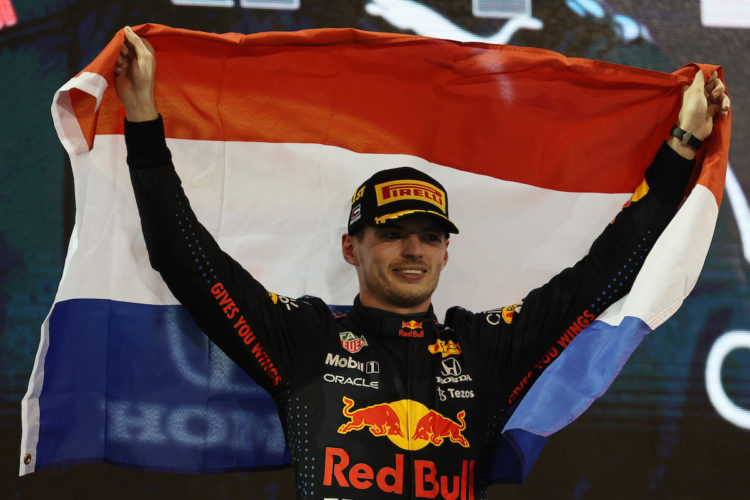 Max Verstappen has won his first Formula 1 world championship following a dramatic ending to the Abu Dhabi Grand Prix, in which he overtook rival Lewis Hamilton on the final lap of the race.

A late safety car was deployed following a crash for Nicholas Latifi during the final laps, allowing Verstappen to pit for fresh Soft tyres, while Hamilton stayed out on old Hards.

As the damaged Williams car was cleared up, Race Control stated that lapped cars were not allowed to overtake the Safety Car, meaning there would be a number of cars in front between Hamilton and Verstappen.

However, as the cars approached the third sector, lapped cars were notified that they were allowed to overtake, and the Safety Car was to peel off to provide one lap of racing.

Verstappen hounded his rival and overtook him into Turn 4, completing the overtake that ultimately sealed the world title.

Hamilton looked to be on course for a record-breaking eighth title for much of the race. However Hamilton, who lined up in second place, immediately jumped into the lead on the run to the first corner, before the first controversy of the day presented itself at Turn 5.

Verstappen attempted to regain the position and lunged up the inside of his rival, forcing Hamilton to avoid contact by taking to the escape road.

No investigation was necessary as the stewards felt that Hamilton had given up the time he gained by going off the track.

Verstappen swapped to Hard tyres on lap 14, before Hamilton pitted a lap later. The Briton was then held up by Sergio Perez, who was yet to pit, and it allowed Verstappen to close within a second to Hamilton.

Hamilton began to stretch away once again from Verstappen, however a Virtual Safety Car (VSC) was then deployed after Alfa Romeo’s Antonio Giovianzzi stopped on the side of the circuit.

Verstappen pitted for fresh Hard tyres, while Mercedes stayed out to retain track position. The Dutchman began to eat into the gap but it looked to be too much before Latifi’s crash allowed him to pit again and complete the title-deciding overtake.

Mercedes, who had one hand on the Constructors’ trophy heading into the final weekend, secured its eighth consecutive championship.

Raikkonen bows out of F1 with DNF

One of the other major occasions this weekend was Kimi Raikkonen’s final race in the sport.

The Alfa Romeo driver, who has entered more races than anyone in F1 history, was forced to park up in the garage after suffering brake issues.

The Iceman was running towards the back of the field prior to the incident, as he lightly touched the barrier at Turn 5 with a spin.

Raikkonen was the first of three retirements during the race, with team-mate Giovinazzi and Williams’ George Russell failing to get to the end.

Sergio Perez looked to be on course to take his fourth F1 podium in seven races, however he was called into the pit lane to retire the car prior to the last-lap restart.

The Mexican was running in third but had to concede to Carlos Sainz, whose maiden season at Ferrari ended on a high.

Yuki Tsunoda captured a career-best finish in fourth place, ahead of AlphaTauri team-mate Pierre Gasly. Valtteri Bottas, in his final race for Mercedes, was sixth on the road.

Lando Norris was the victim of a late slow puncture and had to pit late on for fresh tyres. He ended the race in seventh, ahead of the Alpine duo of Fernando Alonso and Esteban Ocon. Charles Leclerc took the final point on offer in tenth.