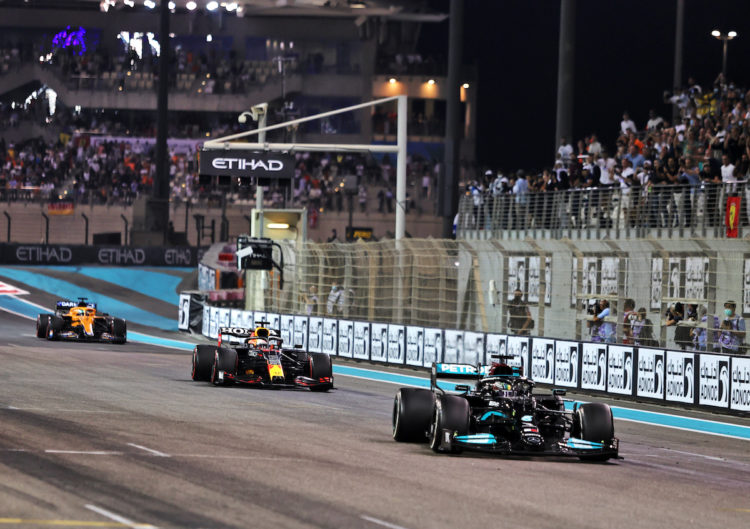 One of Mercedes’ protests over Red Bull and Max Verstappen at the Abu Dhabi Grand Prix has been dismissed by the Stewards, after Mercedes alleged Verstappen overtook Lewis Hamilton under the Safety Car.

The stewards are still yet to deliver a verdict on Mercedes’ other protest, which relates to the restart procedure at the end of the race.

As the drivers prepared to get underway for the final lap of the grand prix following a handful of laps behind the Safety Car, Verstappen drew alongside Hamilton in preparation for the restart.

While acknowledging that Verstappen moved ahead, the Stewards say it was only for the briefest of moments while both cars were accelerating and braking.

“The Stewards consider that the protest is admissible,” read a statement. “Having considered the various statements made by the parties.

“The Stewards determine that although Car 33 did at one stage, for a very short period of time, move slightly in front of Car 44, at a time when both cars where accelerating and braking, it moved back behind Car 44 and it was not in front when the Safety Car period ended (i.e. at the line). Accordingly, the Protest is dismissed and the Protest Deposit is not refunded.”

The document added that “Red Bull argued that Car 44 was not overtaken by Car 33, that both cars were “on and off the throttle” and that there were “a million precedents’ under Safety Car where cars had pulled alongside then moved back behind the Car that was in front.”

Verstappen went on to overtake Hamilton during the final lap of the race, before going on to take his first world title.