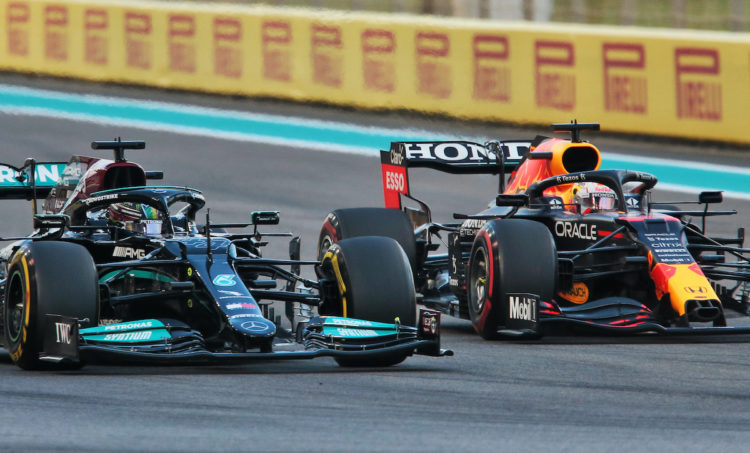 Hamilton had led the majority of the race after passing Verstappen at the start of the race. The pair were involved in drama on the opening lap when Verstappen lunged to take the lead, but forced Hamilton wide in the process.

Hamilton would cut across the corner and keep the lead. The stewards decided the incident required no action after deeming Verstappen forced Hamilton off-track.

Hamilton would then go on to dominate the race, but with just a handful of laps left, a Safety Car was thrown in reaction to a crash by Nicholas Latifi.

It looked as though Hamilton would cruise to the finish behind the Safety Car, but the race was restarted with just one lap remaining. However the true drama unfolded when Michael Masi issued a notice saying lapped cars wouldn’t be allowed to overtake, as he is allowed to do so under the regulations.

But with just a handful of corners before the Safety Car pitted, the FIA changed that notice and permitted lapped cars to overtake. That message however was only given to those cars between Hamilton and Verstappen, rather than the entire field.

With just one lap of green racing remaining, Verstappen was able to slipstream Hamilton down the back straight to take the lead and clinch a controversial victory.

Reacting to the result, Russell, who will become a Mercedes driver next year, branded the FIA’s decisions “unacceptable” on Twitter.

“Max is an absolutely fantastic driver who has had an incredible season and I have nothing but huge respect for him, but what just happened is absolutely unacceptable,” he wrote on social media.

Toto Wolff reacted angrily to the decision via team radio, telling Masi: “No Michael, no, no, that was so not right.” Masi was later heard responding to Wolff: “Toto, it’s called a motor race, OK? We went car racing.”