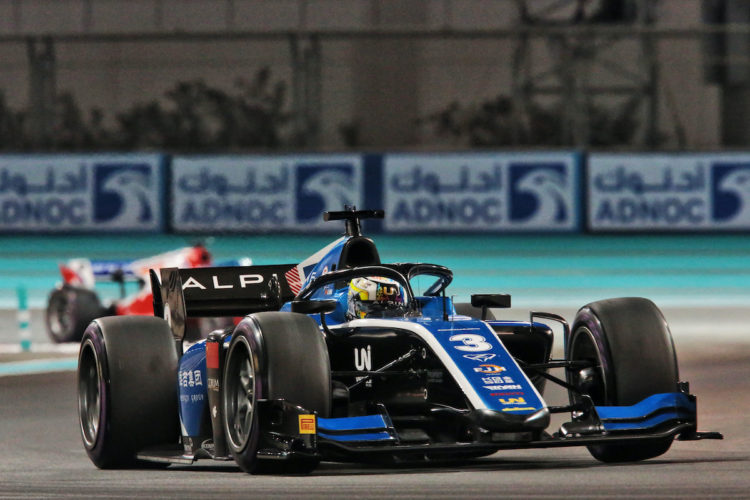 The Chinese pilot who will be racing in Formula 1 with Alfa Romeo in 2022 inherited the lead on Lap 11 due to mechanical gremlins that forced reverse-grid pole sitter Marcus Armstrong onto the sidelines.

Armstrong maintained the lead from reverse-grid pole ahead of Ralph Boschung and Guanyu Zhou. Theo Pourchaire got bobbed down from fourth place on the grid and fell back to ninth behind Liam Lawson.

Newly-crowned champion Oscar Piastri meanwhile, got a good getaway from eighth and was up to sixth before contact with Liam Lawson at Turn 5 forced the Kiwi off the track. The Australian would be later be awarded a five-second time penalty by the stewards for the infringement.

Lap 3 and Zhou nipped past Boschung for second into Turn 6, whilst Robert Shwartzman completed a similar move on Dan Ticktum for fourth at the same time.

Jack Doohan overtook Pourchaire for ninth on Lap 4 just as the Virtual Safety Car was deployed due to Alessio Deledda stopping his HWA Racelab at Turn 9 following a collision with Olli Caldwell.

The Safety Car was deployed to allow Deledda’s car to be recovered but the drama did not stop there when racing got back underway.

Piastri, running in 13th place, made an incredible double-overtake on Juri Vips and Roy Nissany into Turns 6 and 7. However, with no DRS on the exit, the Australian was back under threat, as Vips and Nissany fought back. Nissany’s late-braking into Turn 9 caused terminal damage to Piastri and Vips’ machines.

The Safety Car was back out with Armstrong leading Zhou, Boschung, Shwartzman, Ticktum, Jehan Daruvala, Felipe Drugovich, Lawson, Doohan and Pourchaire in the top ten.

It was disaster on the restart for Armstrong, as a mechanical problem exiting Turn 1 robbed the Kiwi of his second F2 victory. Zhou took over ahead of the pack, which he would not throw away.

Following a lap under a Virtual Safety Car to retrieve the DAMS car, Shwartzman’s quick reactions helped him pull alongside Boschung’s Campos for second place into Turn 6.

Further behind, Daruvala was beginning to run out of tyre grip, with Drugovich passing the Red Bull Junior driver for fifth on Lap 16 at Turn 9 before Lawson did the same four laps later.

Zhou held on for his fourth victory of the campaign, his first since Silverstone. Shwartzman came home in second position in front of Boschung, who picked up the second F2 podium of his career.

After some brilliant defensive driving in the closing laps, Ticktum held off Drugovich for fourth, with the Brazilian in fifth. The remaining point-scorers were completed by Lawson, Daruvala and Doohan.

Piastri was already crowned champion in Sprint Race 1 but the battle for second overall between Shwartzman and Zhou after Sprint Race 2 sees the gap come down to 17 points in the Russian’s favour. 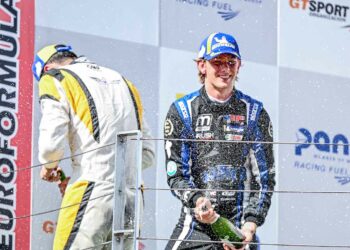