Norris ‘nervous’ about starting behind Verstappen and Hamilton 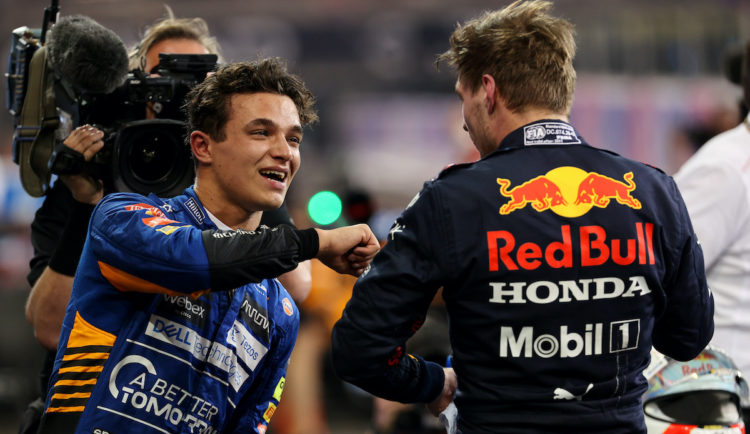 McLaren’s Lando Norris will line-up third on the grid for Sunday’s Formula 1 season finale in Abu Dhabi, with championship contenders Max Verstappen and Lewis Hamilton starting immediately ahead of him.

The Briton admitted it’s a “nervous” situation to be in, given the pair are fighting over the World Championship and that puts him in a predicament over whether to battle them or let them run their own race.

“I’m a bit nervous, because I kind of want to just stay where I am, and just watch everything unfold over the first few laps, or even the whole race,” he said after qualifying an impressive third.

“I also don’t want to really get involved too much because it can cause a lot of controversy. So I don’t know.

Norris described his own P3 lap as a “surprise” as McLaren heads into the final race seeking a strong result as it battles Ferrari for ‘best of the rest’ in the Constructors’ Championship, with a hefty 38.5 point gap between the two teams.

“I just had a clean lap in the end,” he explained. “I went for pole, but it didn’t quite work out as it’s still a little bit off. But no, it was a nice lap to P3. It was a bit of a surprise.”

Hamilton and Verstappen head into the final race tied on points, with the Dutchman securing an impressive pole position to take the upper hand on Sunday.