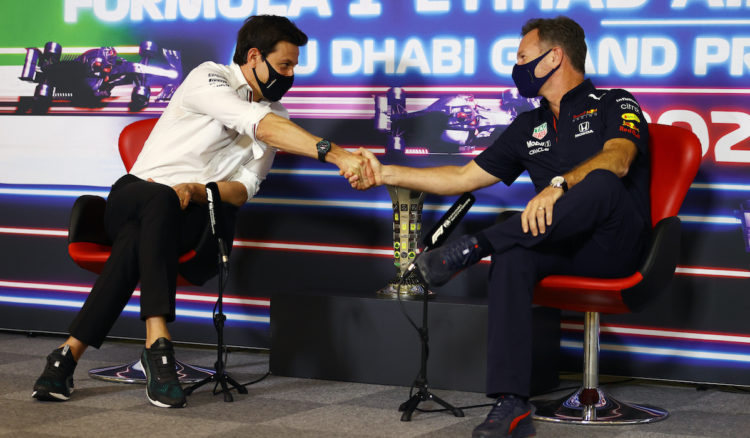 Title-chasing Mercedes and Red Bull have been locked in an intense and fierce battle for the 2021 Formula 1 World Championship, which comes to a head this weekend in Abu Dhabi.

The battle has seen not only drivers Lewis Hamilton and Max Verstappen clashing on-track on several occasions, but there has been plenty of off-track action too with team bosses Toto Wolff and Christian Horner banging heads and talking tough.

The pair haven’t seen eye-to-eye this year, but took the opportunity to shake hands and discuss the upcoming finale on Friday.

“Good luck,” Wolff said to Horner. “May the best man and the best team win.”

Wolff added that the season has been one of, if not Mercedes’ toughest, as it has faced its first real challenge for the championship, with Red Bull hoping to end its record run of seven consecutive Drivers’ and Constructors’ Championships.

“This one is just a fierce fight between teams and drivers that have done a really great job. It shows that the push that all of us have done in order to win this is a level that certainly in my years at Mercedes is unprecedented.”

Although Mercedes hold a healthy advantage in terms of Constructors’ points, Hamilton and Verstappen head into the race tied on points, meaning they simply need to beat one another to claim the title.

“Who’d have thought coming into this season that we’d be here with an outside shot of going for the [Constructors’] but to be tied on points with Lewis?” said Horner.

Horner praised Verstappen’s contribution to the season, claiming their car hasn’t been a match for Mercedes’ W12 in the final races, with the Dutchman the reason they’re still in the fight.

“We’ve obviously talked about the weekend, and the most important thing is obviously for him [Verstappen] to enjoy this weekend and to give his best, to drive exactly as he has in the previous 21 races, to attack the weekend in the way that he has, that has given him those nine victories, that has taken him to this point of being tied on points with Lewis, and to enjoy it.

“He’s driven phenomenally well. I think since the summer break, we haven’t had the strongest car, and I think it’s Max that’s kept us in this championship. So I think the biggest thing for him is just go for it, just enjoy it. Obviously the target is, we have to beat Lewis.

“The only chance we have to win this championship is to beat Lewis, and we want to that on the track. We want to do that as we’ve done on at least nine previous occasions with Max so far this year.”