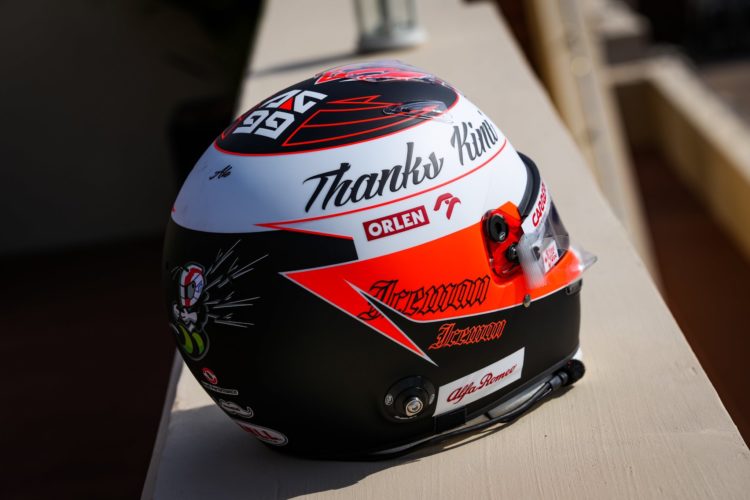 Antonio Giovinazzi will sport a Kimi Räikkönen-inspired helmet at the Abu Dhabi Grand Prix as a tribute to his retiring team-mate.

Räikkönen will retire from Formula 1 following the conclusion of this weekend’s round, bringing down the curtain on a career that began back in 2001.

Räikkönen will retire as Formula 1’s most experienced driver, having started 349 races, taking 21 victories and the 2007 world title.

Giovinazzi is also bowing out of Formula 1 after the final event, having lost his Alfa Romeo seat, but he will sport a helmet design inspired by the style Räikkönen used in his 2007 title-winning campaign.

“Time to celebrate a legend, time to thank a true friend,” Giovinazzi wrote on social media.

Several other drivers will run different helmet designs at the season finale.

Valtteri Bottas will run a helmet with pictures of his high points from his Mercedes career as he bids farewell to the team after five years.

AlphaTauri driver Yuki Tsunoda has tweaked his helmet design as a tribute to outgoing power unit partner Honda, which has also supported his single-seater career.

Ferrari’s Charles Leclerc has also unveiled a one-off design for this weekend’s round.