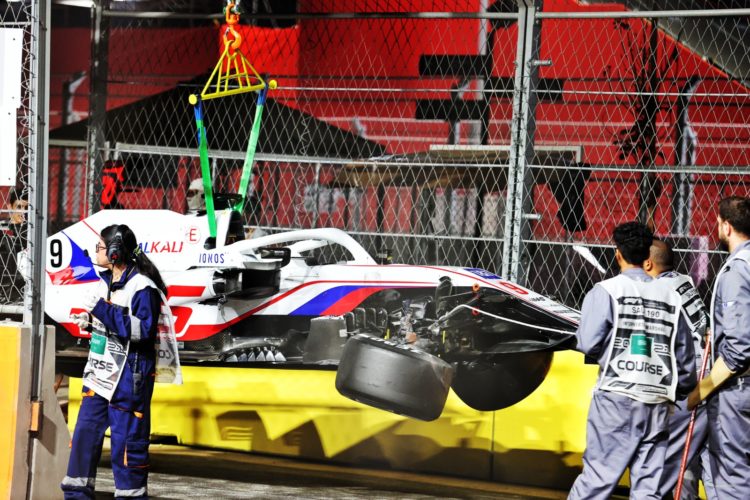 Haas rookies Mick Schumacher and Nikita Mazepin have been warned that the team is “pretty low on parts” and that they must be cautious during the build-up to Sunday’s Abu Dhabi Grand Prix.

Haas is poised to finish at the foot of the championship for the first time in its existence after opting to focus its resources on its 2022 project.

But in recent races it has suffered damage to its cars after a spate of incidents.

Mazepin’s chassis was damaged in Qatar after a heavy kerb strike in the opening practice session while he then suffered a large race-ending accident in Saudi Arabia.

Schumacher’s race in Saudi Arabia was also brief after he spun through Turn 22 and crashed out.

“The two last races, not only Saudi but also Qatar, we had some damage and there was no time to make new parts,” said Haas boss Guenther Steiner. “So our stock is pretty low on parts.

“We have got enough to do the race if we don’t have any big accidents on Friday, then we will be okay. But for sure, the drivers will be made [aware] of the situation.

“We cannot take any risks on Friday. It’s not that we are completely without parts, we have got enough parts, but to have a Friday this weekend like we had a Sunday last weekend, that would put us in a bind.”

“The rest of the parts – the stock is not high but we have enough wings and floors, so we should be okay with that one.

“But normally when you do a chassis you do other parts as well, so we just need to be a little bit careful on Friday but then we will be okay.

“It’s not like we are in a panic situation sitting here, we just need to be careful on Friday. “