Petrucci: Dakar ‘like a pilgrimage to the bike’, ‘cannot wait’ to compete 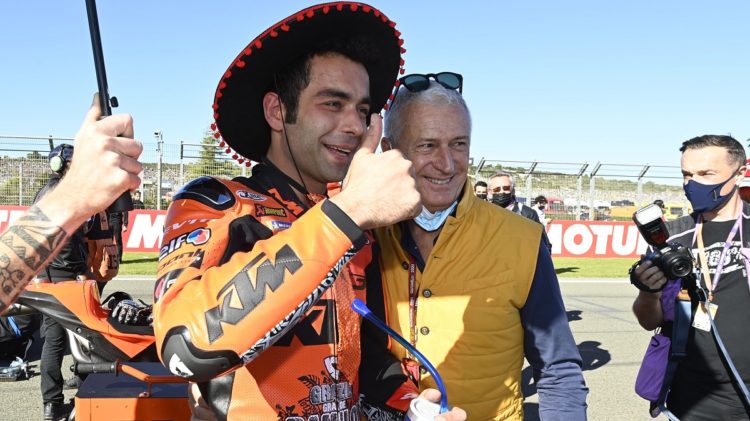 Danilo Petrucci says he “cannot wait” to take to the start for his first Dakar Rally in January as he waved goodbye to the MotoGP paddock after the Valencia Grand Prix.

Petrucci’s time in grand prix racing came to an end after 2021 after being dropped from Tech 3 KTM’s line-up for 2022, the Italian receiving an offer from the Austrian marque to live out a boyhood dream to compete in the prestigious Dakar with its factory operation.

The ex-factory Ducati rider-with which he scored his two career MotoGP wins-tested KTM’s 450 rally machine in the dunes of Dubai in between the Emilia Romagna and Algarve GP’s several weeks ago and enthused that he “cannot wait” to tackle the 4000 mile route through the deserts and rocky outcrops of Saudi Arabia.

“I cannot wait (to compete in first Dakar Rally) it has been tough this year so I started to ask myself what motivates me the most and where do I have the most passion, and that is just to ride a bike so I chose a sport where you just stay on the bike for many hours like the Dakar,” explained Petrucci.

“When I was 15/16 I wasn’t racing pocket bikes or Moto3 I was racing minicross so I thought maybe I could try and thanks to KTM they gave me this present, and it will be an incredible adventure.

“To me it is like a pilgrimage to the bike and I simply cannot wait to get on the bike and ride on the dunes and get out into the desert.

“It (MotoGP career) has been a big cycle for me, I started fighting for the last places in the races but never stopped believing in myself and then coming from superstock where nobody knew me, I didn’t know anything about MotoGP but I’ve won twice and stood on the podium many times.

“This year has been really tough so I said maybe it’s the right time to choose another way, and I’m so happy to have felt this kind of joy.”

Petrucci said seeing members of the grand prix paddock “getting emotional about me is incredible”, admitting he “couldn’t resist” crying after experiencing the amount of support he received ahead of his last race, adding that “MotoGP has given a lot to me.”

“It’s been a really emotional day, I told myself to not cry but when I arrived to the grid and everyone came to say hello I couldn’t resist,” continued Petrucci.

“It was really nice to see all my friends here coming to shake my hand one last time, I’m happy to have shared a lot of emotion with people and to see them watching MotoGP and getting emotional about me is incredible.

“When you wave your hand to a grandstand and thousands of people are saying hello to you it’s the best feeling in the world, and riding this bike is the same it’s unbelievable.

“Today I just tried to enjoy the last kilometres on this fabulous bike, MotoGP has given a lot to me.”