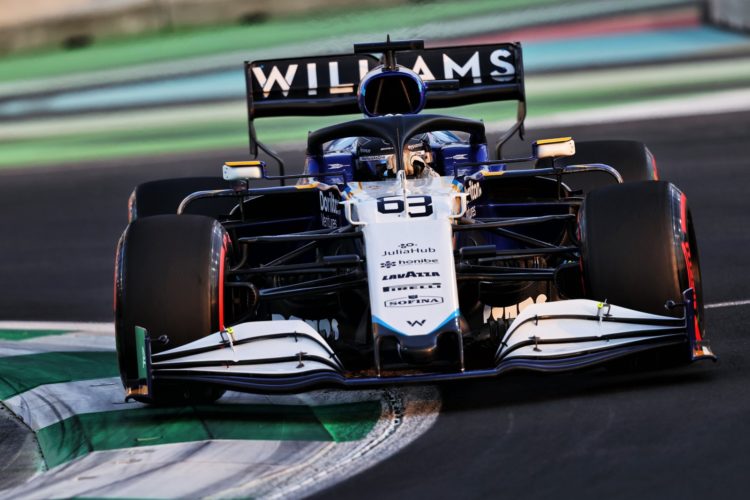 Williams says George Russell has proved a “major inspiration” to the team through its lowest ebb ahead of the Briton’s final event with the team this weekend.

Russell stepped up to Williams for 2019 just as the squad slumped to the rear of the field with uncompetitive machinery, amid off-track worries about its future.

Russell made Q2 on several occasions through 2020, coming close to the points, while this year he has scored 16 of the 23 points amassed by Williams.

That included a shock podium at the rain-shortened race in Belgium, having stunned by qualifying second, while he also put the car third on the grid in Russia.

Russell will switch to Mercedes from 2022, alongside Lewis Hamilton, with his seat at Williams taken by Alexander Albon.

“At the centre of much of what we have achieved over the last few years has been George,” said Williams’ Head of Vehicle Performance Dave Robson. “This weekend is his final race for the team.

“His enthusiasm, dedication and tremendous skill – as well as the occasional well-founded criticism – has been a major inspiration to the team throughout the bad times and the good times.

“We thank him for everything that he has brought to the team, wish him well for his future with Mercedes, and we hope that we have been able to give him some valuable experience and ideas that will serve him well in the future.”

Williams heads to the final round eighth in the Constructors’ Championship, with its advantage over Alfa Romeo trimmed to 10 points, after Antonio Giovinazzi classified ninth in Saudi Arabia.

“If we can maintain eighth place in the championship, then this will be a fair reward for the skill and dedication of everyone in Grove and at the track,” said Robson.

“Over the last few difficult seasons, nobody has dropped their commitment nor lost their racing instinct and, no matter what the final result is, we can be proud of what we have achieved this year.”