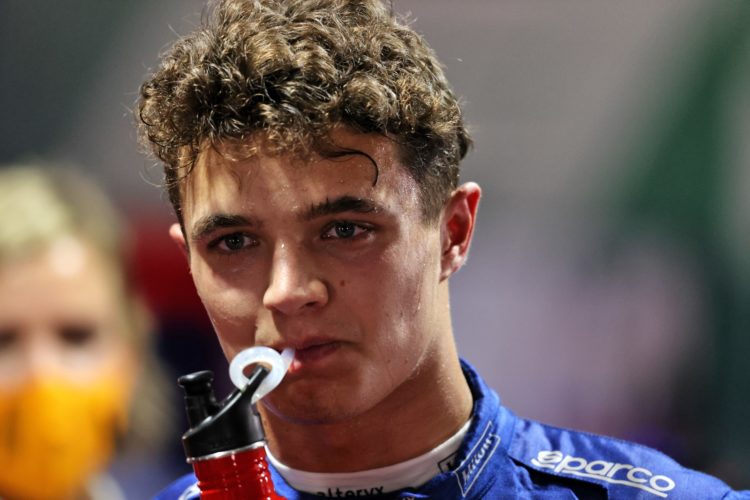 Lando Norris says Formula 1 should scrap its rule permitted a free tyre change during race suspensions after losing out in Saudi Arabia.

Norris held sixth position during the first stint of the race and came into the pits when the Safety Car was deployed following Mick Schumacher’s accident.

But the race was then halted while repairs were undertaken to the barriers.

It left Norris 14th for the restart – in which he lost out amid Sergio Perez’s spinning Red Bull – and behind rivals who were able to undertake their mandatory pit stop during the red-flag period.

“I’ll just say the rules should get banned, and they should bin the rules, they should press delete a number of times until that line and paragraph is deleted and erased from history,” he said on the red flag rule.

“I just got unlucky a lot of the time, the red flag ruined everything – basically everyone got ahead of me.

“And then even with the crashes, the one with Perez I was on the left and I got unlucky again and I couldn’t go right, then everyone’s like kamikaze and crashing into each other.

“Just a long race to score one point but better than nothing.”

Norris’ team-mate Daniel Ricciardo was one of the beneficiaries of the race’s suspension as he surged up to fifth place.

“The red flags in a way were good because the starts were good so I was able to always move forward pretty much, in two out of three starts,” he said.

“But I started on the first start with the Hard and I think that was the tyre, so once it was a red flag it was a little too used to go again and we were forced to do the rest of the race with the Medium and it wasn’t as fast as the Hard.

“Potentially I could have challenged Esteban [Ocon] at least a little more with the Hard, but in any case happy to get a top five and definitely it’s nice moving forward, so no complaints.”