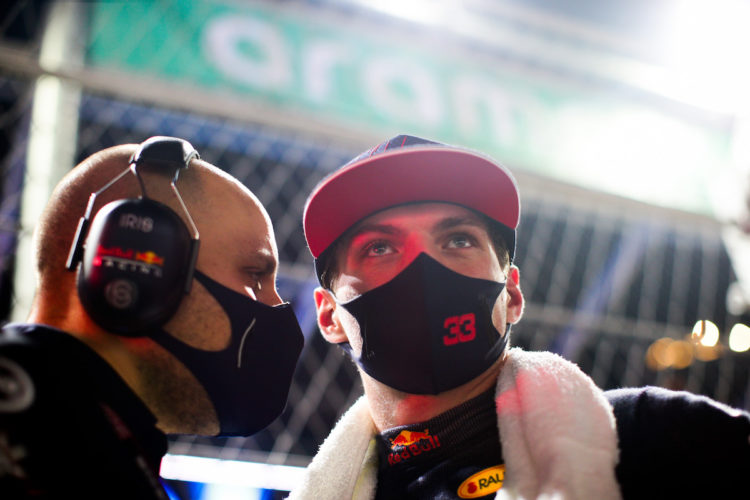 Formula 1 race director Michael Masi says the talks he had with the Red Bull pit wall regarding Max Verstappen’s grid position for the second restart in Jeddah was “a normal discussion”.

At the Saudi Arabian Grand Prix’s first restart on Sunday, which came about after a red flag period, Verstappen dropped from first to second on the run to Turn 1, behind title rival Lewis Hamilton.

Verstappen attempted to hold the position around the outside of the opening corner, but completed the overtake off the track before another red flag was deployed for a crash in the midfield.

A radio message was then broadcast on the world field when the cars returned to the pits, with Masi discussing Verstappen’s starting position for the upcoming restart with Red Bull’s sporting director Jonathan Wheatley.

“I’m going to give you the opportunity to start from grid position two [later corrected to three] for this, based on what occurred at Turns 1 and 2,” Masi said. “We would drop you back behind Hamilton. That is my offer. You have my suggestion.”

Red Bull risked a time penalty if the stewards felt Verstappen had gained an advantage by going off the circuit.

Masi asserts that he wasn’t striking a deal with Red Bull, but that the deliberations were part of normal procedure.

“I wouldn’t call it a deal as from a Race Director’s perspective, I have no authority to instruct the teams to do anything in that situation,” Masi said.

“It was a result of the red flag that came about due to the incident at Turn 3. The priority with any red flag situation is A; to make sure the drivers are safe, and then to activate the marshals’ recovering with cleaning the track and so forth.

“So it probably seemed a bit elongated compared to normal, however it is very much a normal discussion that takes place. When I saw it happen at Turn 2, I immediately suggested to the stewards that I am going to give the opportunity [to Red Bull] to give that place back.

“The red flag obviously ensued very quickly thereafter and that was absolutely the priority before we got going again. Being as we were under the suspension, it was the ability to effectively correct that before we went racing going again.

“It’s very much a normal discussion that happens regularly on a number of occasions and has had all year, and previously.”