Hamilton lost ‘up to 0.4s/lap’ with post-clash wing damage 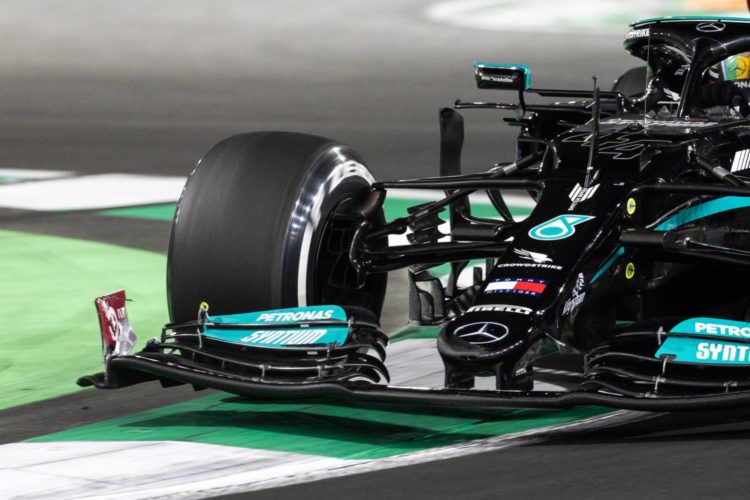 Mercedes believes the damage sustained to Lewis Hamilton’s car following his clash with Max Verstappen cost him up to four-tenths per lap.

Hamilton struck the rear of Verstappen’s car when the Red Bull driver braked along the back straight in a misjudged attempt to hand Hamilton the lead in Saudi Arabia.

“[The time loss] was going up and up, so we started off with probably only about a tenth or two after he got sandwiched with Esteban and Esteban ran over it,” said Mercedes’ trackside engineering chief Andrew Shovlin.

“After Max we lost the whole side of it so we’re [losing] up to nearly four-tenths of performance.”

Hamilton went on to set the fastest lap of the race, in order to gain the bonus point for fastest lap, a decision Shovlin said was entirely down to the driver.

“He’s very determined, we were in two minds, we were seeing others struggling with tyres, we could see the wing was most definitely not guaranteed to stay on the car after the evening it had,” he said.

“It’s a difficult decision between going for the point or do you play it safe.

“Ultimately Lewis was the one who took the decision and he was probably aided by the fact he can’t actually see the front wing as if he was watching the TV like we were he may have thought better of it.”