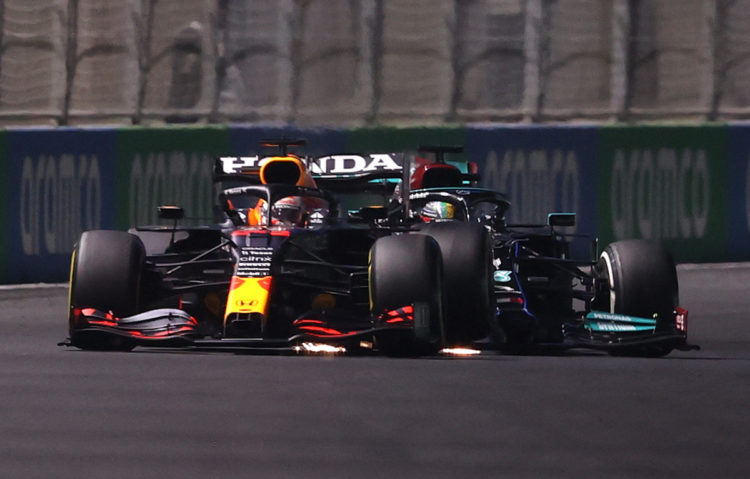 Max Verstappen has been issued a 10-second time penalty after being found guilty of causing a collision with title rival Lewis Hamilton at the Saudi Arabian Grand Prix.

The penalty does not impact Verstappen’s final race position, and the Red Bull driver still classifies in second place.

Verstappen was instructed by his team to let Hamilton by and into the lead of the race after he previously defended his position by running off the track at Turns 1 and 2.

When he slowed down on the run into the final corner, he was hit in the rear by Hamilton, who sustained wing damage.

The stewards outlined that Verstappen was told to give the position back to Hamilton at Turn 21, but was informed to do so “strategically”. In essence, Verstappen slowed to let Hamilton by prior to the DRS detection point, so that he could then use the extra top speed in an attempt to overtake Hamilton into Turn 1.

“Car 33 [Verstappen] slowed significantly at Turn 26,” the statement from the stewards continued. “However, it was obvious that neither driver wanted to take the lead prior to DRS detection line 3.

After looking at the telemetry, it was determined that Verstappen “braked suddenly and significantly, resulting in 2.4g deceleration”, which was highlighted as a “key point” for the stewards.

The stewards added that while they accepted that Hamilton could have overtaken Verstappen when he first slowed, they “understand why he (and the driver of Car 33) did not wish to be the first to cross the DRS. However, the sudden braking by the driver of Car 33 was determined by the Stewards to be erratic and hence the predominant cause of the collision and hence the standard penalty of 10 seconds for this type of incident, is imposed”.

Verstappen was also handed two penalty points on his superlicence, taking his total tally up to seven in the last 12 months.

Verstappen and Hamilton head into the season finale in Abu Dhabi next week level on points, with Verstappen in front on win countback.