Piastri on brink of title after win in shortened F2 race 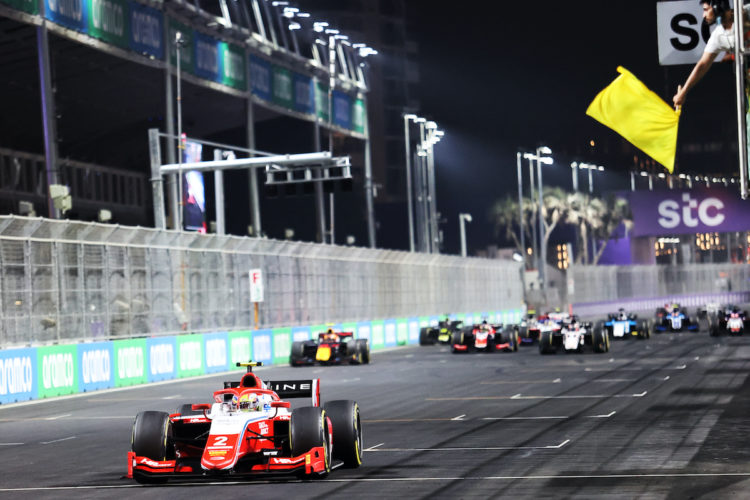 Oscar Piastri won his fifth race of 2021 FIA Formula 2 Championship but the race was brought to an end early following a couple of accidents that ended the Feature Race prematurely.

The race was delayed by over 35 minutes due to repairs to the barriers on the exit of Turn 13.

When the race eventually got underway, Theo Pourchaire stalled from third position and was violently collected by Enzo Fittipaldi. The red flags brought the race to a halt whilst the medical team had seen to the drivers involved.

Both drivers were conscious but were extracted by the medical crew and transported to a nearby hospital.

After another delay of 40 minutes, the race would resume with a race distance of 20 minutes plus one lap with only half-points being awarded.

After just eight minutes of racing the red flags were shown once more following an incident at Turn 23.

Olli Caldwell spun and collected Guilherme Samaia and after a few minutes of uncertainty, after the order changed with some drivers coming into the pit lane, Piastri was declared the winner of the half-points race.

Shwartzman was second and picking up nine points, meaning that championship for Piastri is not yet clinched. Boschung was third, which is his first ever podium in F2 ahead of the two UNI-Virtuosi cars of Zhou and Drugovich in fourth and fifth.

The top ten was rounded off by Vips, Lundgaard, Armstrong, Lawson and Ticktum.

Piastri’s lead in the championship has increased to 51.5 points over second-place Shwartzman with one round remaining in Abu Dhabi and 65 points left on the table.

PREMA’s one-two in the shortened Feature Race in Saudi Arabia confirms they seal the FIA Formula 2 Teams’ Championship for the second year in succession.

The final round at Yas Marina will be next weekend as part of the Abu Dhabi Grand Prix support bill.