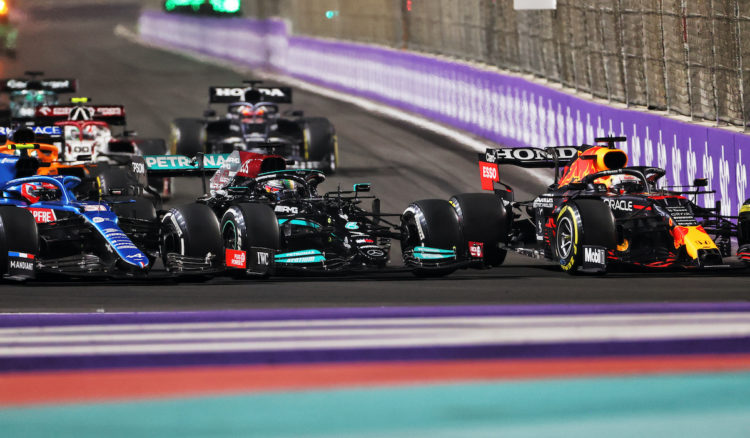 Max Verstappen was second on the road, having lead Hamilton for a portion of the race following a series of early red flags.

Hamilton attacked Verstappen on lap 37 of the race, but both drivers ran off the road at Turn 1 amid their battle.

Verstappen was instructed by his team to hand the position back following communications with the FIA, but as he did so at the final corner, Hamilton ran into the back of his rival.

The incident sparked outrage between the camps, with Hamilton sustaining damage to his front wing.

A handful of laps later, Verstappen attempted to let Hamilton back through again. When Hamilton moved past, Verstappen immediately jumped back into the lead, before allowing Hamilton ahead once more on the following lap.

Verstappen was then forced to nurse his Medium tyres home and ended the race far behind Hamilton in second.

With Hamilton taking the fastest lap, Verstappen and Hamilton head to the Abu Dhabi finale level on points.

While there was some anticipation for carnage on the opening lap following a series of lap one crashes in Formula 2, the F1 cars got away relatively cleanly.

However, on lap 10, Haas’ Mick Schumacher hit the wall at Turn 22, which brought out the Safety Car for three laps before Race Control decided to issue a red flag.

With regulations allowing for a tyre change under red flag conditions, Verstappen was vaulted into the lead as he opted to stay out during the Safety Car while the Mercedes duo of Hamilton and Valtteri Bottas pitted for fresh tyres.

At the restart, Hamilton moved ahead of Verstappen on the run into Turn 1, and Verstappen, who attempted to hang on around the outside, went off the circuit to overtake Hamilton.

The Dutchman took the lead, with Esteban Ocon moving into second while Hamilton was demoted to third place.

However, the red flag was back out again as a series of incidents occurred on the exit of Turn 3. Sergio Perez was spun around following contact with Charles Leclerc, while Nikita Mazepin hit hard into the back of a slowing George Russell.

Perez, Russell and Mazepin joined Schumacher on the sidelines for the remainder of the grand prix.

For the third standing start of the evening, Red Bull accepted an offer from the FIA to drop behind Ocon and Hamilton for the procedure.

Ocon took the leading spot on the grid but Verstappen, from third on the Medium tyres, surged into the lead into Turn 1, with Hamilton and Ocon making contact.

Hamilton quickly moved ahead of Ocon and went in pursuit of Verstappen for the race lead.

Bottas pips Ocon to third at the line

Esteban Ocon looked to be on course for a second podium finish of the 2021 campaign, however Valtteri Bottas chased him down and completed a late overtake.

The duo went side-by-side on the run to the start/finish line, with Ocon classifying behind the outgoing Mercedes driver by one-tenth of a second.

Daniel Ricciardo scored valuable points for McLaren in fifth, ahead of Pierre Gasly in sixth for AlphaTauri.

The Ferrari duo of Charles Leclerc and Carlos Sainz ended up seventh and eighth after scrapping for position during the grand prix.

Antonio Giovinazzi, who will leave Alfa Romeo at the end of next weekend’s race in Abu Dhabi, scored his first points since the Monaco Grand Prix in ninth, ahead of Lance Stroll in 10th.

Stroll’s Aston Martin team-mate Sebastian Vettel was the only other retirement from the race, as he sustained damage following incidents with both Yuki Tsunoda and Kimi Raikkonen.

The 2021 F1 season will conclude next weekend in Abu Dhabi, where either Verstappen or Hamilton will be declared the champion.