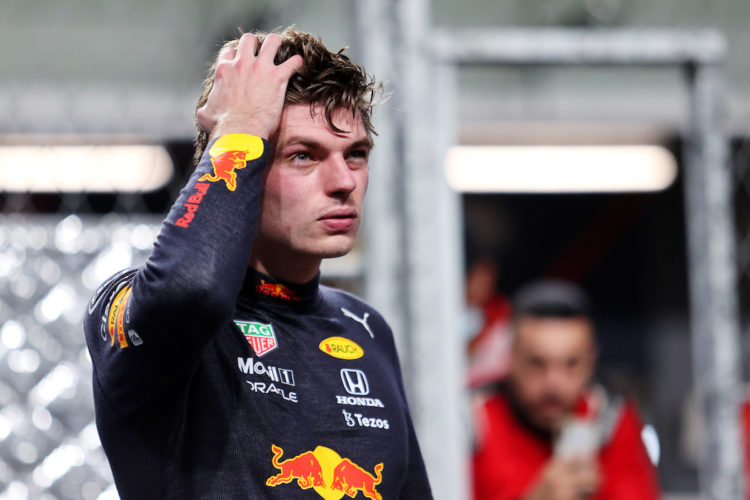 Max Verstappen has set his sights on taking victory at the Saudi Arabian Grand Prix despite his clash with the wall at the end of Q3 on Saturday.

The Dutchman was on course to take pole position for the race, however the Red Bull driver hit the outside wall after locking up into the final corner.

Verstappen was forced to settle for third place, behind title rival Lewis Hamilton on pole and Valtteri Bottas in second place.

Despite his setback, Verstappen asserts that he still has a chance to take victory in Jeddah on Sunday evening.

“I saw it was a good lap, I was three-tenths faster on my delta,” Verstappen reflected. “I thought the last corner there might be a bit to gain.

“I knew Lewis was a tenth, tenth and a half ahead, but I approached it like I always do in qualifying. But now somehow I just locked up.

“I have to see if I braked later or not, from my feeling I didn’t. It’s just really disappointing because it was a really good lap up until then, I was really enjoying it.

“Then of course not to finish it is really disappointing, especially now in this fight, you want to start first.

“But nevertheless in a way it also gives me hope because in Qatar we were four and a half tenths off [in qualifying] and in the race, it was going to be really tough. Here, I think we have a good shot at it.”

Verstappen denied that Sunday’s grand prix is damage limitation after his qualifying incident, stating his objective is “of course to win the race”.

The 24-year-old currently holds an eight-point lead over Hamilton in the Drivers’ standings and doesn’t believe his crash is a turning point in the title fight.

“Today I’m upset with myself but there are still two races to go, lots of things can happen,” Verstappen said.

“I feel good with the car, luckily we’ve been competitive, not like Qatar where we’ve been off. It’s a nice battle, it’s exciting, you go into a session not knowing who’s going to be ahead of the two teams.

“I think that’s always really cool for everyone. Hopefully it’s going to be the same tomorrow.”