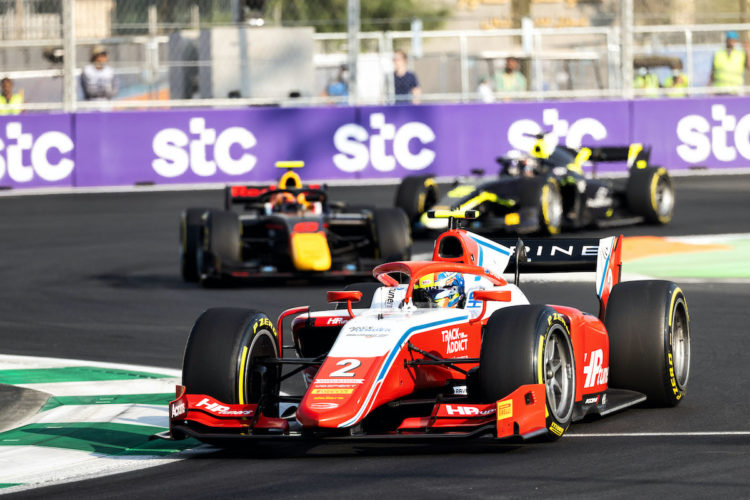 Oscar Piastri took a giant step closer to the FIA Formula 2 title with victory in Sprint Race 2 in Jeddah.

The Australian pilot kept in touch with Jehan Daruvala throughout the majority of the race before overtaking him with four laps remaining to seal an important win.

Daruvala maintained his lead from reverse-grid pole ahead of Piastri, who had got the jump on Bent Viscaal to move up to second into the first corner.

A four-car pile up at Turn 1 involving Sprint Race 1 winner Marcus Armstrong, Clement Novalak, Guilherme Samaia and Alessio Deledda was enough for the Safety Car to make an early appearance on track.

The top ten before the race got back underway at the end of Lap 4 were Daruvala, Piastri, Christian Lundgaard, Viscaal, Dan Ticktum, Robert Shwartzman, Juri Vips, Felipe Drugovich, Jack Doohan and Liam Lawson.

At the end of Lap 5, Drugovich pulled out to the inside of Vips into Turn 27 to go up to seventh. Vips fought back on the pit straight only to clip the UNI-Virtuosi before the braking zone of Turn 1. The Estonian retired on track and the Safety Car was back on circuit.

Following another few laps to allow the Hitech and Logan Sargeant’s HWA to be cleared, Daruvala led Piastri again on the restart but a lock up into Turn 1 forced the Carlin driver to overshoot the first chicane and keep hold of the lead.

The stewards would later intervene and award the Red Bull Junior driver a five-second time penalty for gaining an advantage by going off the race track.

Lundgaard behind would also later receive the same penalty for the same offence after his combat with third-place Bent Viscaal.

Lap 11 and Shwartzman lunged down the inside of Ticktum into Turn 27 and jumped up to fifth position.

Piastri with the DRS finally completed his move on Daruvala to take the lead into Turn 1 on track on Lap 17.

Ticktum also made his move on Doohan into Turn 27 on the same lap to go up to sixth place.

Lawson behind the pair spun on the exit of Turn 13 into the barrier and the Safety Car would effectively end Sprint Race 2.

Piastri ultimately led the field over the finish line on his final lap to win for the fourth time this year.

Viscaal equalled his best result of the season with second, and Shwartzman made it two PREMA drivers in the top three.

Ticktum was fourth with Doohan, Pourchaire, Fittipaldi and Guanyu Zhou rounding out the top-eight points-scorers. Piastri also collected the points for the fastest lap.

Daruvala and Lundgaard’s time penalties dropped both to 14th and 15th.

Piastri’s win and fastest lap increases his lead to 47 points over Shwartzman, who is now up to second in the Drivers’ Standings at the expense of Zhou.

The gap now means that if Piastri was to outscore his nearest rival by at least 19 points and outscore Zhou by at least nine in Sunday’s Feature Race, the Alpine Academy driver will be crowned the 2021 FIA Formula 2 Champion with a round to spare.

The Feature Race begins at 17:25 track time before the Saudi Arabian Grand Prix.