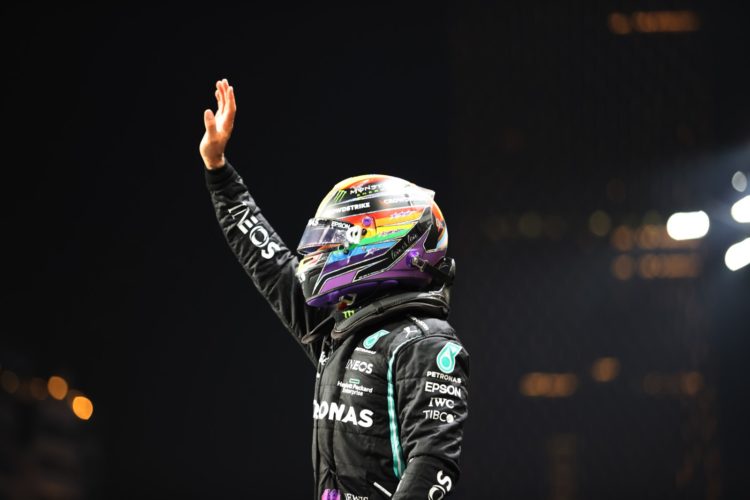 Max Verstappen set the provisional benchmark during the early stages of Q3 as Hamilton was forced to abort his first effort after sliding wide on the entry to Turn 10.

Hamilton registered a time, which was good enough only for third, but on his next run he elevated himself above Verstappen with a time of 1:27.511s.

Verstappen attempted to demote Hamilton and put in a breath-taking final run in which he darted close to the walls, most prominently through Turn 2, as he set fastest sector times.

But through the final corner Verstappen locked up on entry, drifted wide, and hit the wall on exit, sustaining damage to the right-rear of the car.

That secured pole position for Hamilton while Valtteri Bottas – ahead of Verstappen on track – slotted into second to grab a 1-2 for Mercedes.

Bottas’ result came after Mercedes had to change his power unit between FP3 and qualifying due to a fuel leak, while he also suffered a misfire during the closing stages of Q1.

Verstappen, who halted his damaged car on track, was left down in third place.

Sergio Perez had been in the mix at the sharp end of the pack but in the final reckoning he was pushed down to fifth, behind Ferrari’s Charles Leclerc.

Ferrari repaired his SF21 after his sizeable FP2 shunt without any changes to the chassis or power unit.

AlphaTauri had both drivers in Q3, with Pierre Gasly sixth and Yuki Tsunoda eighth, either side of McLaren’s Lando Norris.

Esteban Ocon was ninth while Antonio Giovinazzi kissed the wall in Q2 but still managed to secure a spot within Q3, rounding out the top 10.

Daniel Ricciardo was eliminated in Q2 while Kimi Räikkönen was unable to match the heroics of Giovinazzi and claimed 12th.

Räikkönen was also involved in a close scrape with Bottas through Turn 17 as he brushed his compatriot’s slow-moving car while on his final hot lap.

Sainz has wild and costly Q2

Carlos Sainz was slowest in Q2 after making costly errors in the session.

Sainz, who had an initially low-key lap deleted for track limits, lost the rear of the SF21 through Turn 11 on his next push lap, half spinning, lightly brushing the wall on the exit of the corner.

That caused minor damage to the rear wing endplate and while Sainz was able to return to the pits he suffered a snap of oversteer through the same corner on his next run and was forced to abort his effort.

“It is impossible, the car is undriveable,” said Sainz after the moment that left him out of qualifying.

Aston Martin endured a dismal session as neither Sebastian Vettel nor Lance Stroll made it through Q1.

Vettel was 17th, with Stroll 18th, as the AMR21 emerged as the second-slowest car around Jeddah.

Haas occupied its usual position at the rear of the pack though Mick Schumacher clawed his way into contention at the lower end of the midfield, classifying within a tenth of Stroll.

A gap of over a second followed to team-mate Nikita Mazepin, who is using the older Haas chassis, following the damage the newer version sustained during practice in Qatar.