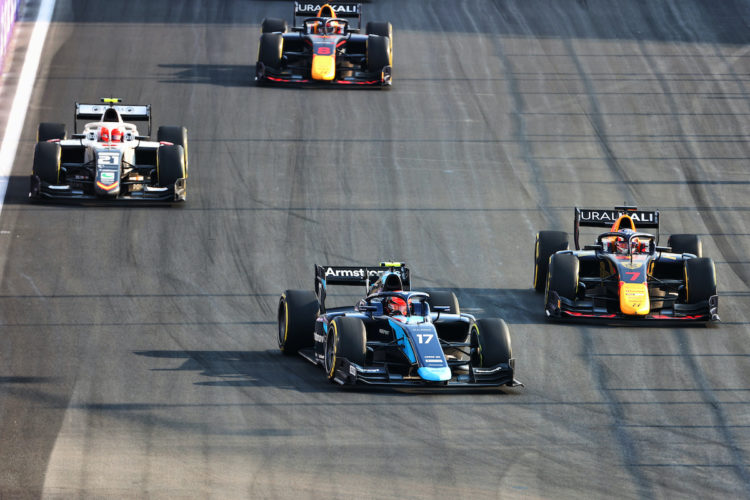 The New Zealander began the race from second on the grid behind compatriot Liam Lawson but got the jump on him at the start before fending him off in the closing stages to take victory.

Turn 1 was where Armstrong pulled alongside the Hitech driver following a great launch but the green-flag action came to a temporary halt when a concertina collision involving Olli Caldwell, Guilherme Samaia and Marino Sato at Turn 4 brought out the Safety Car.

Caldwell carried on for a front wing replacement but Samaia and Sato were out on the spot.

Seconds after the race got back underway, Guanyu Zhou found himself on the wrong end of a collision with Christian Lundgaard at Turn 2 on Lap 4. The Chinese driver fell to the rear of the field and out of contention for points.

Boschung’s tyres were beginning to fall away on Lap 10, as Vips moved up to the podium places and the Swiss driver would continue to fall down the order by the majority of the field.

The second Safety Car was deployed as Pourchaire spun into the barrier at Turn 22 on Lap 14.

The pack was brought back together, with Armstrong leading in front of Lawson, Vips, Drugovich, Shwartzman, Lundgaard, Piastri, Jehan Daruvala, Dan Ticktum and Bent Viscaal.

Green-flag conditions were back on in Jeddah, as the field prepare for a three-lap shootout to the chequered flag.

One man on a charge was Daruvala, who was able to complete a remarkable double-overtake on Piastri and Lundgaard and leap up to sixth position at Turn 27.

On the final lap, Ticktum out-braked the championship leader to the outside of the same corner to go up to eighth.

At the front, Armstrong was able to come through to become the tenth different winner of this year’s FIA Formula 2 Championship. Lawson made it two Kiwis in the top two, with Vips completing the podium in third.

Drugovich was fourth ahead of Daruvala who had benefitted from Shwartzman, with the Russian being awarded a five-second time penalty for gaining an advantage by going off the race track when battling with Lundgaard earlier on in the race.

Shwartzman fell to sixth, while Lundgaard and Ticktum rounded out the points-scorers. Piastri was ninth and out of the points but will start Sprint Race 2 in second position on the grid behind Viscaal, who will be on reverse-grid pole.

With the top two in the championship not scoring in Sprint Race 1, the gap remains the same but Shwartzman’s result means he is now a single point behind second-place Zhou, with Piastri continuing his pursuit of the title with a 40-point lead.