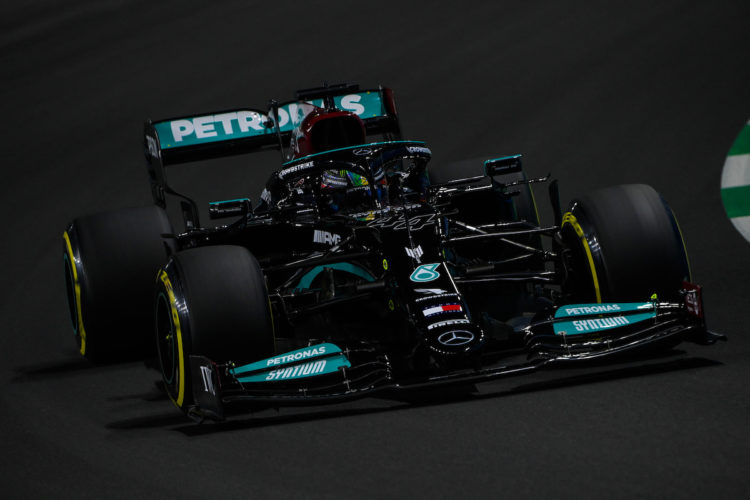 Lewis Hamilton says traffic at the Jeddah Corniche Circuit is “a bit of a danger zone” due to the fast closing speed of the cars.

Formula 1 is visiting Saudi Arabia for the first time this weekend, with the high-speed street circuit the host of the penultimate round of the season.

As is the case at many tracks, cars use the final sector to create gaps to rivals in front in order to have clear space when setting their own hot laps.

However, much of the final sector in Jeddah consists of a long, blind, flat-out curve, creating the potential danger of a high-speed crash during practice or qualifying.

“That [the traffic] is definitely a lot of worse than a lot of places we go to, it’s Monaco-esque,” Hamilton said. “The closing-distance speed on other cars is definitely getting to a bit of a danger zone.”

However, Hamilton commended the flow of the circuit, saying it is ““incredibly fast” and “when you get into the rhythm, it’s beautiful to drive”.

“What I noticed straightaway is that the grip is just very, very high, from the moment we went out,” Hamilton added.

“I don’t think we were much quicker in this [second practice] session, we were pretty much the same. Our long run pace was kind of similar, but otherwise decent.

“We tried a couple of different things with the set-up. We’re not rapid on a single-lap, I’d say, compared to the others, but my long run pace didn’t seem too bad, so who knows what’s going on.”

The seven-time world champion ended the second practice session on top of the timesheet, edging out Mercedes team-mate Valtteri Bottas by 0.061s.

Despite the strong start to the weekend, Hamilton asserts that Mercedes has work to do in order to remain ahead of rivals Red Bull for the remainder of the weekend.

“I’m generally happy, we made changes between the sessions,” Hamilton said.

“I’m not sure which one I want to stay with but we’ll study through it tonight and work with the guys back at the factory and try to make sure we come with the correct set-up tomorrow.

“It’s definitely not in a bad place, as I said, they [Red Bull] are quite quick, so we’ve got a bit of work to do.”