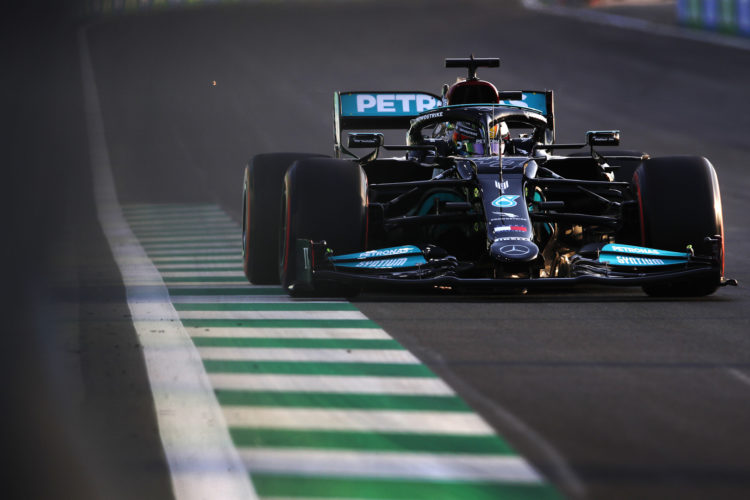 Saudi Arabia has joined Formula 1’s calendar on a 10-year deal and its inaugural edition, along with next March’s second event, will take place at Jeddah.

A 6.1km pseudo-street circuit, featuring a season-high 27 turns, has been constructed along the coastline of the Red Sea in Saudi Arabia’s second city.

The second session took place at night, in line with the schedule for qualifying and the race itself, with the track illuminated by the flood lights.

Several drivers encountered traffic on their respective hot laps – including the leading contenders.

The situation has been accentuated by the high average lap speed at Jeddah, the relatively narrow track width, and the close presence of walls that means several curves are blind on entry.

It was most pronounced on the final stretch on the run to Turn 27, with Hamilton particularly affected, encountering several slow-moving cars on his Soft tyre run before sliding deep into the corner.

It meant Hamilton’s best time of 1:29.018s was set on the yellow-banded Medium compound tyre, with second-placed Valtteri Bottas, 0.061s behind, also setting his best on Mediums.

Drivers were fully into their race runs when the only major incident of note on a relatively drama-free day brought the session to an early conclusion.

Charles Leclerc lost the rear of the Ferrari SF21 through the high-speed left-hander at Turn 22 and suffered a heavy impact with the barriers.

Leclerc was able to walk away from the scene of the accident but the car sustained sizeable damage in the impact.

As the crash came with five minutes remaining the session was not resumed.

Pierre Gasly’s one-lap pace has been impressive throughout the course of 2021 and once more the AlphaTauri driver was at the sharp end of the grid, as he classified third.

Gasly’s time enabled him to jump ahead of points leader Max Verstappen, who was fourth, albeit within two-tenths of pacesetter Hamilton.

Ferrari’s Carlos Sainz was seventh, in front of AlphaTauri’s Yuki Tsunoda, while Red Bull’s Sergio Perez was a low-key ninth.

Leclerc rounded out the top 10 for Ferrari, with McLaren, Alfa Romeo and Aston Martin line astern behind, ahead of the Williams and Haas drivers at the back.