Oliveira: KTM ‘need to change character’ of RC16 to ‘compete’ 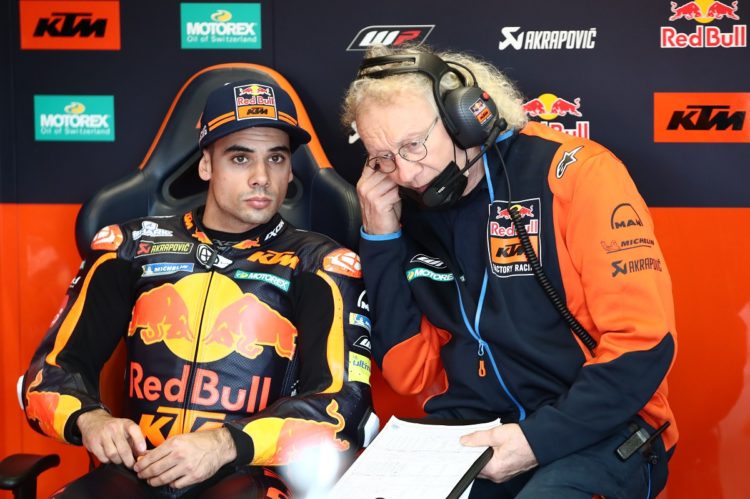 Miguel Oliveira says that KTM need to “change the character” of its MotoGP challenger for 2022 if it is to compete with its front-running rivals after a tricky 2021 campaign.

The Austrian manufacturer struggled to run towards the sharp end of the field consistently this season following a break-out 2020 term that saw it score its first three wins in the premier class-two by Oliveira running for the Tech 3 squad while factory team rookie Brad Binder scored the other-while Pol Espargaro managed an impressive fifth in the riders standings off the back of five rostrums.

KTM also ended up just four markers off second-placed Yamaha in the constructors table and a strong third in the teams with the factory operation, though an inconsistent 2021 saw it slip to fifth in the former tally and down to sixth in the latter.

While its RC16 showed speed on occasion-a mid-season purple patch for Oliveira resulting in three consecutive top two results including a dominant win at Barcelona-the Portuguese rider ended up only 14th overall after lacking speed and struggling slightly with injury after the summer break, though a consistent Binder scored points in all but one encounter en-route to sixth overall.

Oliveira reckons that KTM “need to change the character” of its RC16 for 2022 if it is to return to its consistently-strong 2020 form, the three-time MotoGP race winner revealing that it had made some “significant” findings with the ’21-spec machine it continued to run in the post-season Jerez test ahead of the roll-out of its new bike for the Sepang test at the end of January.

“There were a couple of things in today’s (Friday) programme that were quite significant, we managed to take some clear conclusions and it’s true that at the moment we don’t have a final package to put together,” explained Oliveira.

“It’s just some different parts separated at different times, but today the team worked a lot and everyone in the garage was working hard to get the maximum out of each run and every piece we tried, so hopefully with the information the factory can make some significant changes for the current bike and we can focus a lot in winter testing.

“We just need to wait until the bike is fully together (for 2022) then push it to the limit and see what we can do with it, at the moment this bike is still very similar to this years and the character is still the same and we need to change that to compete with our opponents.”

Binder: “We got some good information”

Binder-who added to KTM’s 2021 win tally with a shock success thanks to a gable to stay out on slicks on a wet track in the Austrian Grand Prix at the Red Bull Ring-confirmed that the organisation had managed to find some interesting findings with some 2022 development parts, including a new fairing that aimed to improved the aerodynamics of its contender.

“It was a very busy day and we tried a lot of things, we played with a few different set-ups and various parts and found some things that felt quite good, we ran a different fairing which had some different positives and negatives,” said Binder.

“We got some good information for the team so they can put a good package together for the Sepang test.

“As you can imagine the new fairing improved some points but also made other things worse, so the guys need to go back to the factory and keep working at it but I’m sure by the time we get to Sepang we’ll have some new shapes to try and we’ll find something that is a good compromise.”