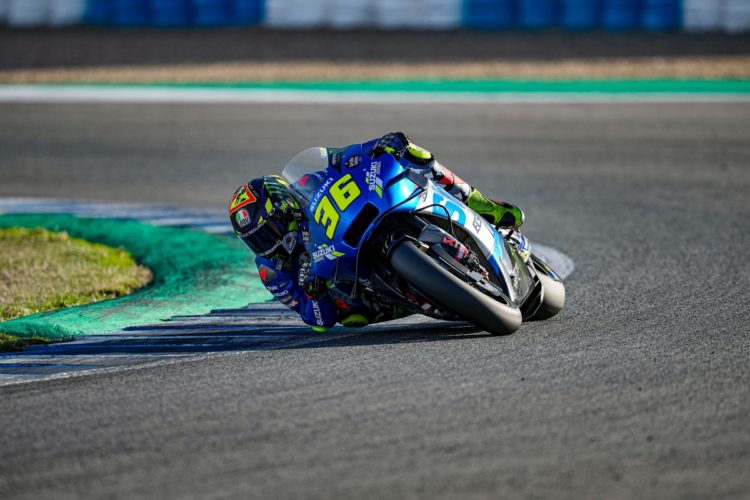 Joan Mir was left encouraged after sampling upgrades brought by Suzuki for its GSX-RR for 2022, the 2020 MotoGP world champion confirming his demands for more power had been met.

Mir and Suzuki as a whole suffered a relatively difficult second album in 2021 after scoring riders and team’s titles in 2020, the Hamamatsu-based manufacturer failing to win a race all season for the first time since 2018 as it failed to make much ground relative to rivals such as Yamaha and Ducati.

A frustrated Mir at least managed to salvage third in the riders standings by virtue of an ultra-consistent campaign, though he was keen to try Suzuki’s new developments after being trounced by Ducati in the season finale at Valencia, arguably the organisation’s best track.

Suzuki were able to make improvements to its inline-four powertrain for the first time in nearly two years following the end of the Covid-19-enforced engine freeze, enhancements that left Mir feeling more positive heading into the winter break.

“I tried a new fairing yesterday, Alex (Rins) tried them today but we mainly focussed on the new engine and the updated electronics,” explained Mir.

“There were many things to try, also things on the chassis side to help us turn the bike better, although I have to admit today (Friday) was difficult due to the wind conditions which made things quite unpredictable.

“The good thing is that improvements like with the turning you can still feel with the wind and the extra power you can feel anyway.

“We’ll put everything together with the team and work out what we’ll have for next year, but it’s been a good day of testing for us.

“We worked on the electronics to improve the traction control, engine brake and all these areas with the new engine so we know exactly what direction we have to take.

“We also worked a lot on the used tyres, but for sure we have other things to try, we still don’t know if this will be the final engine as we gave feedback that there is definitely more power, but we’ll find out.”

Alex Rins reckoned his tough 2021 season-in which he ended up a lowly 13th overall having scored just a single rostrum in the British GP at Silverstone-was partly down to having to ride the GSX-RR “at the limit” to fight with the front-runners.

The Spaniard agreed with his team-mate that Suzuki’s upgraded engine “felt really good” out of the box, though admitted some anticipated gains with the aero package didn’t quite come to pass.

“It’s been a positive two days in Jerez, yesterday was so good and even though today was a bit worse with the wind overall we have some good conclusions,” added Rins.

“We started with the new 2022 engine which works quite good, we need to adjust a little bit the electronics side but more or less the new power delivery and everything works quite good.

“The new fairing’s worked in a good way but we were wanting a bit more of an (aero) effect, so now they (Suzuki) have good feedback to work on this and now we’ll push to have a bit better fairing’s for the Malaysia test.

“I heard that Joan (Mir) had more issues with the electronics side, but for me it (engine) felt really good.”