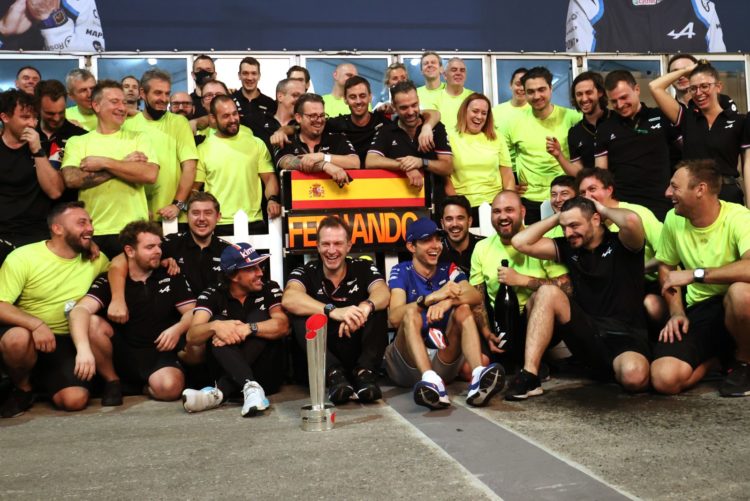 Esteban Ocon says Alpine has been “completely transformed” since the beginning of the 2021 season in the wake of Fernando Alonso’s podium in Qatar.

Alpine, which previously competed under the Renault brand, is on course to finish fifth in the championship for a third straight season, having pulled 25 points clear in Qatar.

That came in a race in which Alonso claimed third, with Ocon fifth, making it Alpine’s second-best return of the campaign, after the Hungary round that Ocon won.

Alpine is one of several teams that has regarded 2021 as transitional amid its long-term target to compete for regular wins and championships under new-for-2022 regulations.

“[There has been] huge, huge progress,” said Ocon. “Definitely since the beginning of the year and since last year.

“I see a team completely transformed, a team united and we have great pressure from the bosses. Laurent [Rossi] was here, Luca de Meo, they are competitors as much as we are. They are fully supportive behind us.

“There are such great vibes, there’s no negative stress inside the team and we are all pushing for the same direction.

“It’s definitely a perfect environment and we are also pushing the tactics to the maximum with Fernando on the track, doing great teamwork and that’s what we are showing on track, how basically the atmosphere is inside [the team] and that’s great.

“We keep that going and the plan as Fernando says is to get the team up – the team ready for fighting for podiums and wins more often in the future.

“That’s why we are working so well at the moment whilst all of us work in the same direction – we all need to keep working.”

Ocon went on to praise Alonso after the Spaniard became the first driver over 40 to score a podium in almost a decade.

“I know how much work he puts in, how much motivation he has even now at his age and with how much experience he has and how much he has achieved in the sport,” he said. “It’s more than impressive.

“I think he’s just a legend of the sport, he’s up there with the top guys – Senna, Schumacher, and he will always remain there because what we are doing now and what I see, how he thinks out of the box compared to the other drivers is unprecedented. There’s nobody that will think like him.

“I am glad to be his team-mate and proud to push as much as we can together for our common target.”