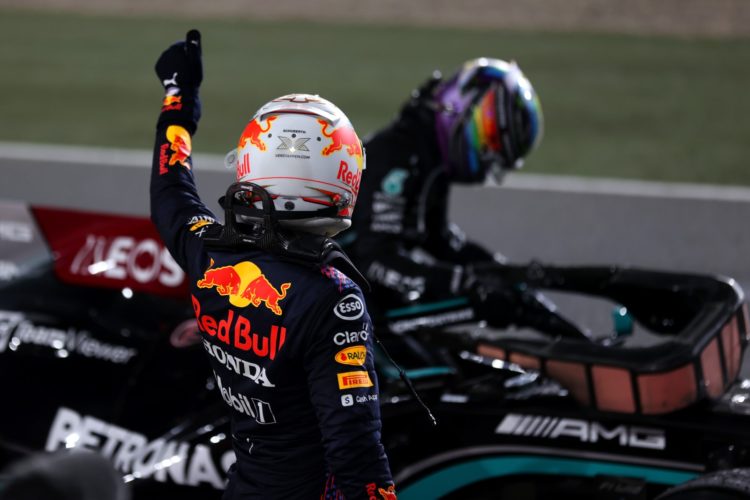 Max Verstappen outlined that he extracted the maximum from his and Red Bull’s potential at Formula 1’s Qatar Grand Prix after keeping hold of the title lead.

Verstappen was relegated to seventh on the grid at Losail due to a penalty for ignoring yellow flags but swiftly reclaimed second during the opening stages of the race.

Verstappen was unable to mount a challenge to long-time leader Lewis Hamilton but set the fastest lap in order to collect the available bonus point.

“It was of course very important to try to clear them as quickly as possible,” Verstappen said of the early laps.

“I had a really good getaway and I was already fourth out of Turn 1. Then I think within five laps I was second and yeah, just tried to keep the gap close with Lewis as much as I could, and I think that worked out well.

“We just didn’t have the pace this weekend to match them. I just tried to follow and yeah, it was alright at the end.

“I did the fastest lap, which I was pretty happy about. At the end of the day it’s one extra point.

“Everything counts at the moment but yeah, overall I would say this weekend wasn’t the best for us, but there’s still two races to go and a lot of things can happen still, so we’ll see.”

Verstappen still holds the advantage in the championship battle albeit with his lead trimmed to eight points.

“I would of course have liked to make it a bigger gap, but when you don’t have the pace, it’s impossible to do that,” he said.

“So we’ll just try to be better, and come back strong, especially in Saudi on the street track, and then yeah, we’ll see in Abu Dhabi.”