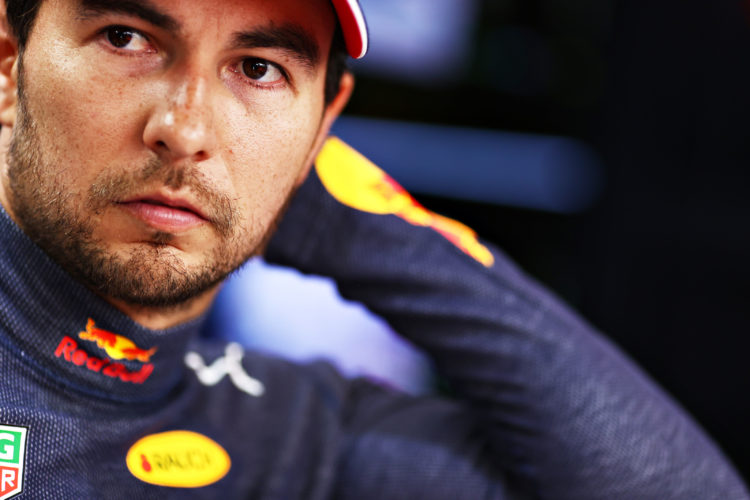 DOHA, QATAR - NOVEMBER 21: Sergio Perez of Mexico and Red Bull Racing prepares to drive in the garage before the F1 Grand Prix of Qatar at Losail International Circuit on November 21, 2021 in Doha, Qatar. (Photo by Mark Thompson/Getty Images) // Getty Images / Red Bull Content Pool // SI202111210484 // Usage for editorial use only //

Perez worked his way through into podium contention at Losail after starting from 11th place and made a relatively early stop as he tried to hunt down Alpine’s Fernando Alonso.

Valtteri Bottas ran long on a one-stop strategy but suffered a left-front tyre failure that removed him from the picture.

Red Bull pitted Perez again and while he overhauled Lance Stroll, Esteban Ocon and Lando Norris – who suffered a puncture – he fell short of snatching the podium away from Alonso.

“We played it safe with the explosions with the tyres out there,” said Perez.

“I think we were thinking more of the long-term picture. I think when we saw what happened to the other cars we were a bit concerned [about] that, so we played it safe and in the end.

“I think we left some points on the table but we managed to minimise the losses.

“We were in the middle of going into the one or the two [stop strategy], and we came out into a lot of traffic.”

Bottas’ failure enabled Red Bull to score handsomely with both cars as it moved to within five points of Mercedes in the Constructors’ Championship.

“I think what happened to Valtteri put the thought in our heads,” he said. “At the end of the day, it’s better than nothing.

“It’s a lot that we are fighting for and I’m a team player. Of course as a driver you want to be on the podium but it is the championship that matters. And as I say, fourth is better than nothing.”