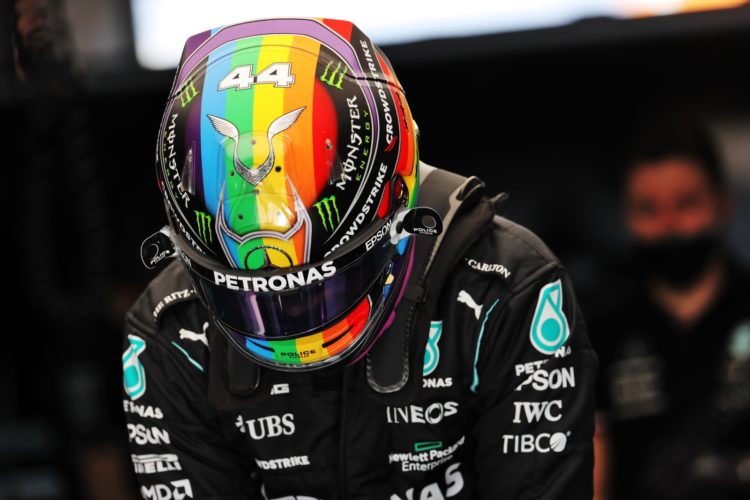 Lewis Hamilton says he intends to continue using his pride-themed helmet design for the upcoming Saudi Arabian Grand Prix, and may also use it at the season-ending event in Abu Dhabi.

Hamilton debuted a helmet livery on Friday with the colours that are associated with the Progress Pride flag, which includes the rainbow scheme and additional colours to reflect other LGBTQ+ communities.

Formula 1 is this weekend visiting Qatar for the first time while the next event will take place in Saudi Arabia, which is also making its debut.

Both countries are set to remain part of Formula 1’s calendar through the 2020s after signing respective 10-year deals.

Speaking in the press conference after taking pole position at Losail, Hamilton said: “I’ll be using the same helmet through probably the last two races after this, or at least next week also.

“On the back it says ‘we stand together’ and ‘love is love’ and it’s important for me to represent that community.

“I think, here, as I know, there are several situations which aren’t perfect and need to be highlighted.

“I hope that someone reaches out and I would love to know what is happening here and what they’re doing to help support that community more, the LGBTQ+ community. I wait to hear.”