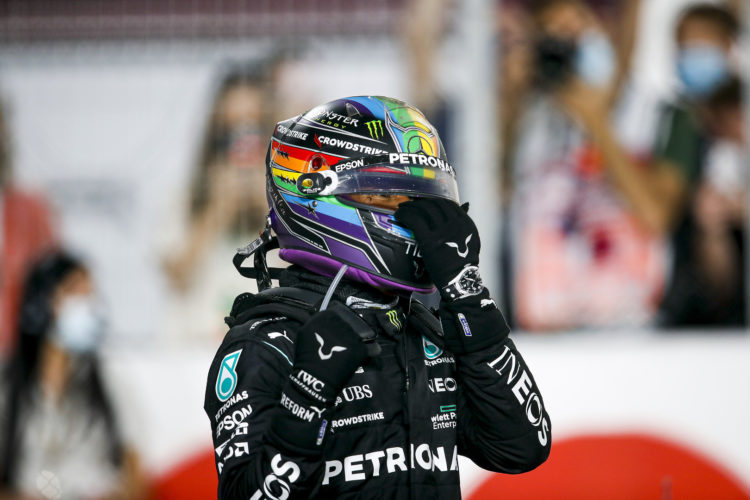 Hamilton kept his rivals at bay throughout the race and executed a straightforward two-stop strategy to register his seventh victory of the year.

Verstappen, who started from seventh after being handed a five-place grid penalty, quickly worked his way up to second but was unable to provide a challenge to Hamilton.

With second, and the bonus point for fastest lap, Verstappen maintains the lead in the championship but his advantage has been cut to eight points.

Fernando Alonso returned to the podium for the first time since Hungary 2014, as he completed the grand prix on a one-stop strategy to take third place.

Sergio Perez was fourth on the road, after he was forced to battle through a number of one-stoppers late in the race after making his own second pit stop.

After the midway point of the race, the high-energy circuit began to take its toll on the tyres, with Mercedes’ Valtteri Bottas being the first to suffer a front-left puncture.

Bottas was running in third place and was yet to make a pit stop to change his Medium tyres, 33 laps into the stint; Bottas made it back to the pits, but eventually retired from the race.

Nicholas Latifi also retired from the event after suffering a puncture at the final corner, only moments after team-mate George Russell had a delimitation of his own.

Lando Norris was called into the pit lane at McLaren to change tyres after the team noticed an issue, and the swap was done before the Briton sustained a notable puncture on the circuit.

Ocon survives to lead other point-scorers

Esteban Ocon also made it to the end of the grand prix on a one-stop strategy, leading a train of cars across the line in fifth place.

Sixth was Lance Stroll, who took his best career finish in F1 since his podium result at last year’s Sakhir Grand Prix.

After enduring a difficult qualifying session, Ferrari recovered to strengthen its hold on third place in the Constructors’ Championship as Carlos Sainz and Charles Leclerc came home in seventh and eighth respectively.

Following his late pit stop for fresh Medium tyres, Norris still secured points in ninth, passing Vettel in the closing stages. The four-time world champion stayed ahead of Gasly, who started the race on the front row, to take the final point on offer.