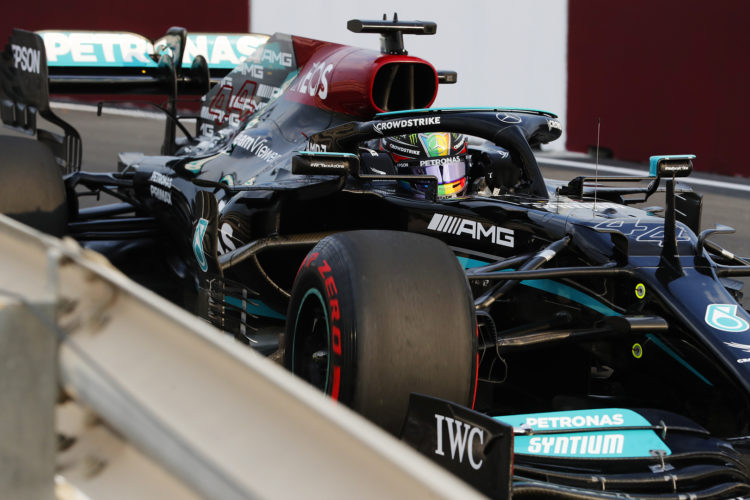 Hamilton, having been quickest in Q1 and Q2, set the benchmark early in Q3 but improved further on his second push lap to record a time of 1:20.827s.

Title leader Max Verstappen emerged as Hamilton’s nearest rival but was almost half a second adrift of his title opponent.

Gasly best of the rest despite scare

Pierre Gasly finished second in both Friday sessions and maintained that form during the final session on Saturday by classifying fourth.

Gasly delivered again in qualifying, taking fourth, despite suffering a scare during his last push lap in Q3.

Gasly ran heavily over the exit kerb at Turn 15 and such was the force involved that it shattered his front wing, with the debris instantly puncturing his front-right tyre.

Gasly halted his AT02 at the exit of the final corner but his incident did not significantly hinder the laps of following rivals, with Race Control only briefly deploying the yellow flags.

Fernando Alonso was a superb fifth for Alpine, just 0.030s behind Gasly, while Lando Norris and Carlos Sainz were sixth and seventh respectively as McLaren and Ferrari atypically trailed AlphaTauri and Alpine.

Yuki Tsunoda and Esteban Ocon ensured AlphaTauri and Alpine had both cars in Q3 while Aston Martin’s Sebastian Vettel rounded out the top 10.

Sergio Perez had a nightmarish evening as he failed to make it through to Q3 at a circuit where overtaking is likely to be tough.

Perez was out of contention after the first Q2 runs on Mediums but a switch to Soft tyres failed to yield the expected gains and he was bumped out in 11th spot.

Perez was not the only big name eliminated at the second hurdle.

Ferrari’s Charles Leclerc lacked pace throughout the session and struggled to 13th place, despite switching to Softs, as he exclaimed his bemusement at the deficit to team-mate Sainz.

Aston Martin’s Lance Stroll, in 12th, and George Russell, in 15th, were the other Q2 participants who failed to make it further.

Usual suspects at the rear

Neither Alfa Romeo driver made it into Q2, with Kimi Räikkönen 16th and Antonio Giovinazzi 18th, and they were split by Williams’ Nicholas Latifi.

Mick Schumacher put in a respectable performance to finish within a couple of tenths of Giovinazzi despite occupying his usual place of 19th.

Haas team-mate Nikita Mazepin was adrift of the field after a spate of setbacks meant his Q1 push lap was his first hot lap since Friday’s opening session.

Mazepin wound up 2.4 seconds down on Schumacher in a session in which the rest of the field was covered by 1.5 seconds.