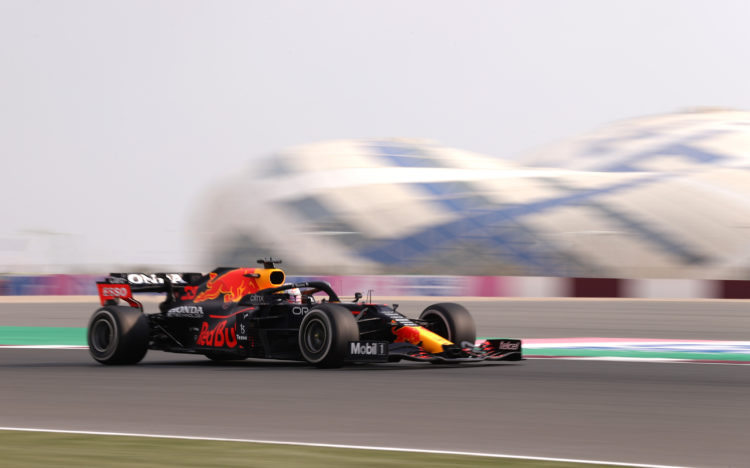 Verstappen set a time of 1:23.723s to finish almost half a second clear of AlphaTauri driver Pierre Gasly.

Gasly set his time towards the end of the session as track conditions gradually improved.

Mercedes finished third and fourth respectively, with Valtteri Bottas ahead of Lewis Hamilton, who complained of being down on power early in the session.

Hamilton, running a rainbow helmet, also spent some time in the pits after sustaining minor front wing damage from running over a kerb.

Yuki Tsunoda made it an encouraging early showing for AlphaTauri by classifying fifth.

Losail was constructed in anticipation of MotoGP’s arrival in 2004 and has been used by the two-wheeled series to open its season for over a decade.

Single-seater action at the venue, located near to capital Doha, has been limited, with the highest-profile event being the sole visit by the now-defunct GP2 Asia Series in 2009.

One of those races was won by a young Perez, one of only two drivers with prior experience of Losail, with the other being Nikita Mazepin, who entered an MRF Challenge event in 2014.

Losail was drafted onto Formula 1’s 2021 schedule at relatively short notice as an effective replacement for the cancelled Australian round.

The track record was broken in the early laps and Verstappen’s benchmark wound up over 15 seconds faster than the previous single-seater best, and almost half a minute up on MotoGP’s lap record.

Qatar will be absent from 2022’s schedule, as it focuses on its World Cup host duties, but it is due to return from 2023 on a 10-year deal, potentially at an alternative location.

It is the first of three events in the region to round out the 2021 campaign, with fellow new venue Jeddah and the revamped Yas Marina due to follow in early December.

A few issues on the kerbs

The session took place in hot and sunny daytime conditions at Losail.

The bulk of the important action – including qualifying and the race – will take place at 5pm local time, just after sunset, where cooler conditions will prevail.

Several drivers struggled over the heavy kerbs at some corners, with parts and sensors being affected, while the run-offs were heavily utilised and are likely to be scrutinised going further in the weekend.

McLaren’s Lando Norris, who rounded out the top 10, was one driver to encounter a problem after running heavily over the Turn 15 kerb.

That damaged a sensor and Norris coasted back slowly into the pit lane in order for repairs to be undertaken.

Mick Schumacher was the only driver to encounter a major off-track excursion as he went wide at Turn 7 and took on a sizeable volume of gravel into his Haas VF-21.

Mazepin’s session also came to an early close due to substantial floor damage caused while out on track.

Second practice is due to begin at 17:00 local time.