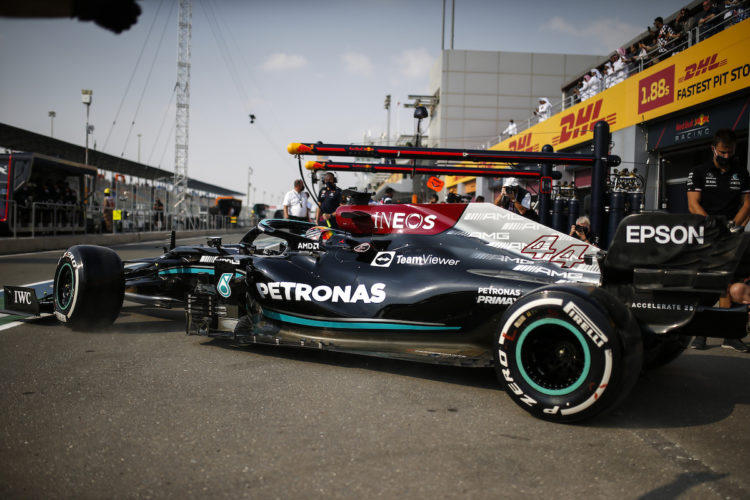 Red Bull team principal Christian Horner has threatened a protest over Mercedes’ rear wing after raising questions regarding “score marks” on the endplates.

Red Bull has been seeking answers to Hamilton’s top-speed, believing it did not just stem from the fresh engine the seven-time world champion took on at the weekend.

Speaking in Qatar about the situation, Horner said a protest is simply a formality if they believe a rival’s car isn’t complying with the regulations.

“Would I protest? Yeah absolutely, if we believe the car is not in compliance, we will protest,” Horner said.

“The straight-line speeds we’ve seen in Mexico and Brazil – I think everyone could see in Brazil was not a normal situation.

“And yes a new engine we know with a Mercedes comes with an increased performance, but when you have sort of a 27 km/h closing speed and you see marks on rear wing endplates that have been marking up from wings that have been flexing, it’s very clear to us what has been going on.

“Of course that’s why I refer it’s down to the FIA to make sure that the cars are in compliance, if they’re not, you protest if you believe that a competitor isn’t complying with the rules.”

Horner added that a potential protest will be result of what happens at this weekend’s event in Qatar.

“We’ll follow the situation and it will depend really on what happens this weekend, what we see and the analysis that we’ve conducted,” Horner said.

“So it really depends what we see, and it’s not just applied to here because I think it’s in many respects even more pertinent to the two circuits that are coming up.

“But as a competitor, as I’m sure Mercedes – and we know – have paid a huge amount of attention to our car throughout the season and we’re obviously doing the same.

“Obviously it’s high stakes, there’s an awful lot to play for and we just want to make sure it’s an equal playing field.”

Mercedes boss Toto Wolff addressed the “marks” that Horner referred to, stating that they are “within what is allowed [in the regulations], and therefore that’s OK.”