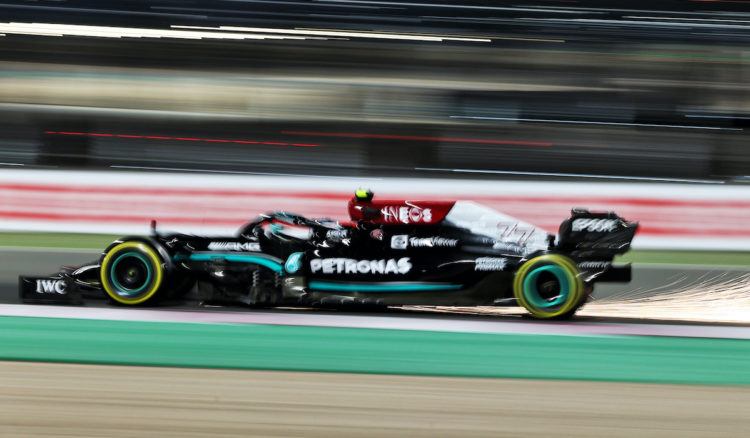 Bottas clocked a time of 1:23.154s at the Losail International Circuit, before it was deleted for track limits, but went again and registered a lap of 1:23.324s.

That would have been fast enough to lead the way but the outgoing Mercedes racer improved on his benchmark to register a time of 1:23.148s.

Gasly was a front-runner in FP1 but set his time comparatively later in the session than his rivals.

But Gasly’s time in FP2 left him firmly in the mix, two-tenths behind Bottas, and ahead of title contenders Max Verstappen and Lewis Hamilton.

Verstappen had been behind Hamilton on his first push runs, having had a scruffy effort that include a wild moment through Turn 10, but he went again to move ahead of the Briton.

From day to night

The first one-hour session was held in daylight in Qatar but the second hour of running took place in the far more representative post-dusk conditions in which qualifying and the race will be held.

That led to overall cooler track conditions while the circuit itself rubbered in as it prepares for its maiden Formula 1 event.

The rules on track limits were altered in-between sessions, with the edge of the purple-and-white kerb outlined as the track limit on all corners, after only five turns were regulated earlier in the day.

In a closely-contested session 13 drivers finished within a second of Bottas at a venue that is welcoming Formula 1 for the first time.

McLaren’s Lando Norris was fifth while Aston Martin’s Lance Stroll was an encouraging sixth, having completed the least mileage earlier in the day due to a hydraulics setback.

Yuki Tsunoda capped a fine day for AlphaTauri in seventh, while Red Bull’s Sergio Perez was a relatively low-key eighth.

Sebastian Vettel encountered traffic twice on his first push lap, venting his frustration with an errant Perez, before moving into ninth.

Ferrari was in the midfield mix but was lower down the leaderboard compared to its recent form, with Carlos Sainz at the foot of the top 10 and Charles Leclerc 13th.

Leclerc also had a wild moment through the vast gravel trap at Turn 10 after understeering off through the exit.

They were split by the Alpine pairing of Esteban Ocon and Fernando Alonso, with Daniel Ricciardo 14th for McLaren.

Backmarkers off the pace

Alfa Romeo, Williams and Haas were adrift of the midfield pack, with Kimi Räikkönen half a second down on nearest rival Ricciardo.

George Russell, Antonio Giovinazzi and Nicholas Latifi followed, as Mick Schumacher was predictably slowest of the 19 drivers who entered the session.

Nikita Mazepin did not participate in the session due to Haas needing to change his chassis.

Mazepin’s chassis sustained damage after running heavily over a kerb during the opening session earlier on Friday.