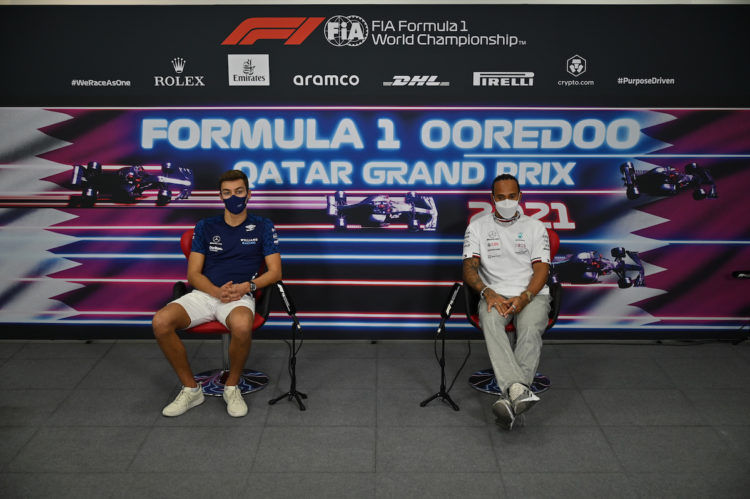 George Russell believes it is “pretty stupid” to bet against Mercedes in the ongoing fight for the 2021 Formula 1 championships.

In the Drivers’ standings, Max Verstappen leads Lewis Hamilton by 14 points, while Mercedes holds an 11 point lead over Red Bull in the Constructors’ table with three races remaining.

Last time out at the Brazilian Grand Prix, Hamilton fought through a series of setbacks throughout the weekend to take his sixth victory of the 2021 campaign.

Russell, who will join Mercedes in 2022 alongside Hamilton, says no one should count the Brackley-based squad out of the current battle.

“I’ve been saying it for a long, long time – when Max and Red Bull seem to have the upper hand, I think it would be pretty stupid to bet against Lewis and Mercedes,” Russell said.

“I think last weekend and recent races has proven just that. The fact they’re still in this fight is pretty exceptional and obviously what Lewis did last week was also exceptional.”

Mercedes is undefeated in the turbo hybrid era and has taken every Drivers’ and Constructors’ championship since 2014.

With Russell stepping up to the team next year alongside the introduction of new regulations, the Briton says he’s keen to work closely with Hamilton, which he states will be key to maintaining its strong form.

“I think next year with this new regulation change there’s going to be so many updates and improvements, and things to work on throughout the whole season,” Russell said.

“I think we are all going to have to come together as a team. There’s no guarantee as to who has the fastest car when you hit the ground in the first test.

“But I think it’s whoever works best as a team who will prevail at the end of the season. I think that’s for sure we will work together to do that.”