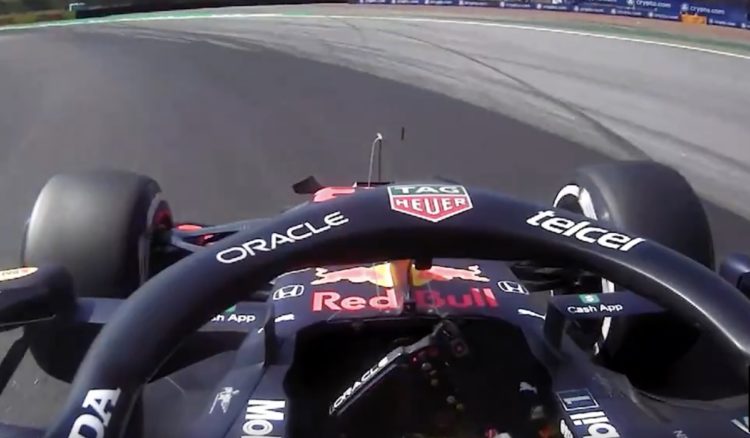 Formula 1 has finally released the onboard footage from Max Verstappen’s RB16B during that contentious move against Mercedes’ Lewis Hamilton at the Brazilian Grand Prix.

Verstappen appeared to have forced Hamilton wide as the Briton attacked into Turn 4 on Lap 47. Both drivers left the track as a result and Verstappen retained the lead of the race, before Hamilton eventually passed for the lead on Lap 59.

The incident was noted by the stewards, but they chose not to investigate it, which drew the ire of Mercedes.

It later emerged that the FIA didn’t have Verstappen’s crucial onboard footage when they made their decision and were therefore unable to determine whether the Dutchman, who now leads Hamilton by 14 points, deliberately forced his title rival wide.

F1 race director Michael Masi admitted after the race that the onboard footage could “potentially” provide a crucial piece of information but that “we didn’t have access to it.”

He added that “all the angles we don’t get live” will be obtained from Formula 1’s broadcast crew and “we’ll have a look at them [later].”

On Tuesday, two days after the incident, F1 finally released the onboard, front-facing footage from Verstappen’s car, which appeared to show the 24-year-old making an effort to make the corner.

Whilst that then supports the stewards decision not to take action, it has left some wondering why the matter wasn’t even investigated, given all the footage wasn’t available at the time.

The onboard video shows Verstappen is steering left the entire time, eventually applying full lock when it becomes clear he won’t make the corner.

Verstappen initially left the racing line to defend from Hamilton, meaning he approached Turn 4 at a more acute angle than normal and carried too much speed into the corner, and was therefore unable to maintain a line that would not have seen him run wide.

Hamilton is then seen taking avoiding action by steering right to avoid a collision.

Mercedes were reportedly considering an appeal against the decision prior to the release of this footage – in the hope the stewards would hand down a five-second time penalty, which would demote Verstappen to third, behind Valtteri Bottas.