Verstappen: I was a sitting duck in Hamilton battle 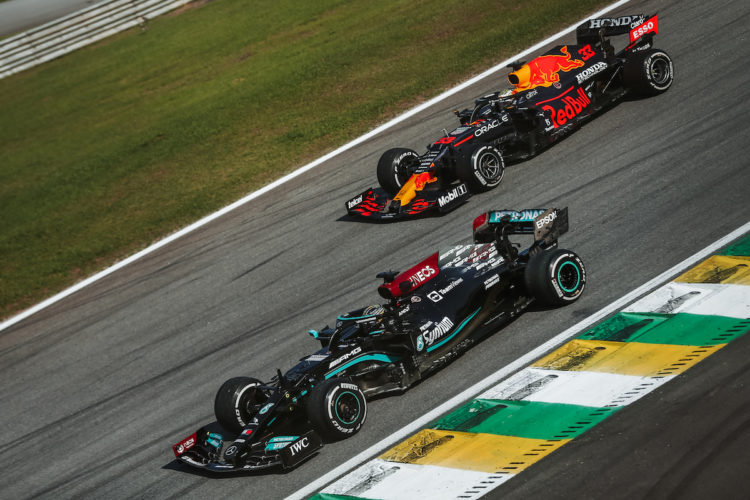 Max Verstappen says he was “a bit of a sitting duck” in his battle with Lewis Hamilton at the Sao Paulo Grand Prix on Sunday.

Verstappen held the lead for much of the race, with Hamilton tailing him, having made his way into second after starting 10th on the grid.

After going wheel-to-wheel on a number of occasions, Hamilton completed the overtake for first place, and ultimately the win, on lap 59.

Verstappen says Hamilton’s strong straight-line speed, which was evident throughout the race weekend, meant that he was vulnerable to an overtake.

“I knew when we went through Turn 3 that he was going to get ahead because he was super-close,” Verstappen said.

“But already, two laps before, I was really starting to struggle on traction and tyres, so I knew it was going to be really tough but you never know. I just tried to do the best I could and, of course, once he got by then, you know, I was hanging on with the tyres to the end.

“I like to win but also you can enjoy the battle, right? I mean, I was a bit of a sitting duck but in a way, I just tried to do the best I could – and that’s also, in a way, sometimes fun and nice for everyone watching.”

Despite Hamilton’s pace advantage last weekend, Verstappen expects the deficit to decrease across the remaining three races as the freshness of Hamilton’s new engine dwindles.

“I would have liked to be a little bit closer, but it just seemed very tough for us here,” Verstappen said.

“Of course [Hamilton] taking the new engine clearly gains them a bit of performance initially, but that will slowly come back to normal. So, yeah, maybe it looks a little bit more dramatic now but I’m confident that slowly that will be a bit more normal.”

Hamilton currently trails Verstappen by 14 points in the Drivers’ standings.